X-linked adrenoleukodystrophy (ALD) is a severe and disabling orphan neurometabolic disease caused by mutations in the ABCD1 gene which encodes for a key protein that is required for metabolism of very long chain fatty acids (VLCFA) by peroxisomes (cellular organelles). Elevated VLCFA leads to axonal degeneration and demyelination in both brain and spinal cord with the likely involvement of both inflammation and mitochondrial dysfunction. The pathophysiology of ALD is also apparently well aligned with potential effects that are mediated by Poxel's two small molecule platforms – direct AMPK activators and deuterium-modified TZDs. 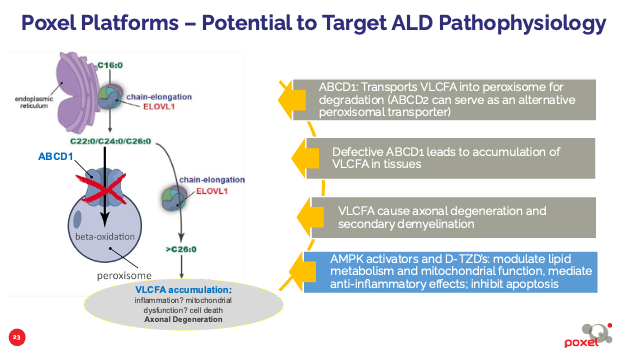 Forms of this disease include adrenal insufficiency, cerebral ALD (C-ALD) and adrenomyeloneuropathy (AMN) which is the most common form – typically occurring in adolescence through adulthood. The relative timing of onset and progression of these overlapping disease forms are shown in the figure below. AMN is characterized by chronic and progressive distal axonopathy involving the long tracts of the spinal cord and to a lesser extent the peripheral nerves resulting in progressive stiffness and weakness in the legs, impaired gait and balance, incontinence, loss of sensation and spasticity. Nearly all men with a diagnosis of ALD will develop AMN, and many women also present with features of AMN with a later onset. C-ALD is characterized by inflammatory demyelination of cells in the brain and typically afflicts children, but many men with AMN may also develop cerebral disease; these white matter brain lesions lead to severe neurologic deficits and death. 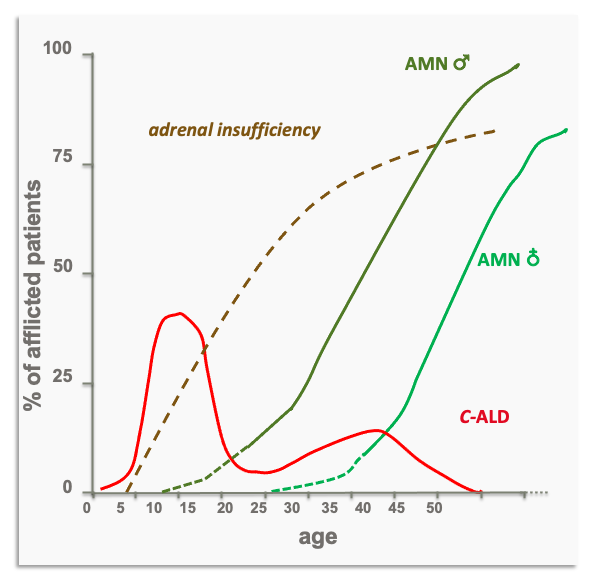 ALD is the most common leukodystrophy with a prevalence similar to hemophilia – up to 1/10,000 individuals in the general population have ALD [https://rarediseases.org]. There are no approved medicines for ALD (other than glucocorticoid supplements for associated adrenal insufficiency). Cerebral ALD (C-ALD) when first detected in early childhood, can be treated with hematopoietic stem cell transplantation. HSCT is currently limited to early stages of C-ALD and this procedure is at risk of severe adverse reactions.

In ALD, two identical Phase 2a clinical POC biomarker studies, one each with PXL065 and PXL770, are planned to initiate as soon as possible, subject to financing. The initial focus will be on patients with adrenomyeloneuropathy (AMN), the largest subtype of ALD. The studies will enroll adult male AMN patients and assess the effect of PXL065 and PXL770 over 12 weeks of treatment on pharmacokinetics, safety, and efficacy using relevant biomarkers, including the impact on elevated very long-chain fatty acids (VLCFA), the hallmark plasma marker of disease. 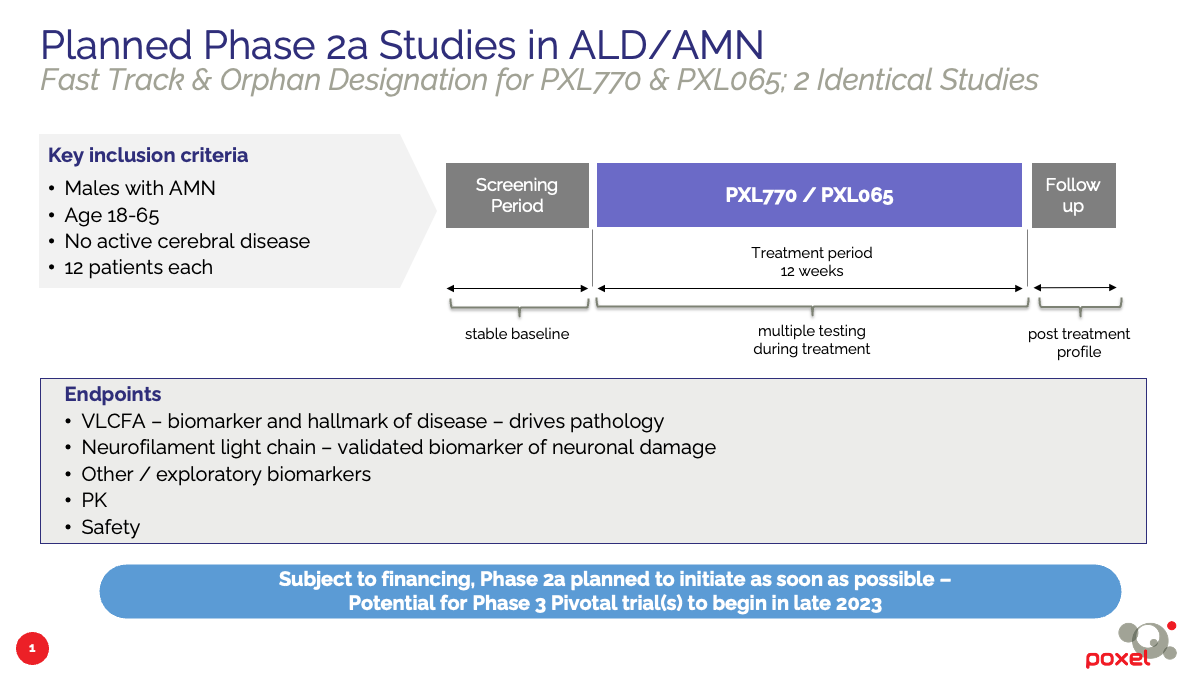 In early 2022, the U.S. Food and Drug Administration (FDA) granted Fast Track and Orphan Drug Designation to PXL065 and PXL770 for the treatment of patients with adrenomyeloneuropathy (AMN), the most common form of X-linked adrenoleukodystrophy (ALD). Orphan Drug Designation (ODD) is granted by the FDA to novel therapeutics for diseases or conditions that affect fewer than 200,000 individuals in the U.S. ODD gives a company a potential seven-year window of exclusive marketing rights following FDA approval, along with a reduction in certain application fees, and tax credits for expenses related to qualified clinical trials conducted after orphan designation is received.

Fast Track Designation (FTD) is designed to expedite development of pharmaceutical products which demonstrate the potential to address unmet medical needs in serious or life-threatening conditions. Filling an unmet medical need is defined as providing a therapy where none exists or providing a therapy which may be potentially better than available therapy. The FDA notes that 'the purpose of the Fast Track program is to get important new drugs to the patient earlier”. FTD must be requested by the sponsor company and must be accompanied by a detailed review of both preclinical and clinical data. The key benefits of FTD comprise enhanced access to the FDA, with regular and more frequent opportunities for consultation and discussion. In addition, drugs with FTD may be eligible for Accelerated Approval, in which a new medicine is approved prior to the availability of definitive data, and Priority Review, in which the standard 10-month review process is reduced to six months. Drugs with FTD may also enter a 'rolling review' of their NDA submission, in which sections are submitted and reviewed as they become available, substantially expediting the approval process.

To learn more on the Fast Track status: https://www.fda.gov/patients/fast-track-breakthrough-therapy-accelerated-approval-priority-review/fast-track

PXL770 is a novel drug candidate that directly activates adenosine monophosphate-activated protein kinase (AMPK). AMPK is a central regulator of multiple metabolic pathways leading to the control of multiple metabolic pathways and reduced inflammation. The rationale for considering AMPK activators in ALD is based on several published findings that show links between AMPK and disease in both animals and humans (slide below). Based on these observations, PXL770 was evaluated in both the in vitro and in vivo ALD models (charts below). PXL770 suppressed elevated VLCFA levels in patient derived cells with an associated increase in expression of the compensatory ABCD2 transporter. PXL770 treatment of ABCD1 null mice also suppressed elevated VLCFA in spinal cord - and in brain and plasma (not shown). Additional experimental results included an observed improvement in neural histology and neuro-behavior in ABCD1 null mice following chronic PXL770 treatment. 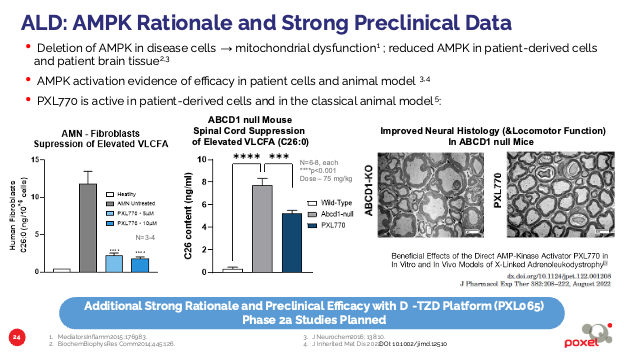 PXL065 offers a new approach for the treatment of ALD. PXL065 is the R-stereoisomer (deuterium-modified single R-isomer) of pioglitazone and its parent molecule has been marketed since 1999 for the treatment of type 2 diabetes. Published literature provides a potential rationale for considering D-TZDs in ALD. Firstly, pioglitazone has demonstrated strong efficacy in the classical ALD model, the ABCD1 null mouse; in addition, pioglitazone has been shown to confer neuroprotection in other contexts. Also, a key non-genomic mechanisms modulated by pioglitazone and PXL065 (and other D-TZDs) – the mitochondrial pyruvate carrier – MPC – is also implicated as a target for neurodegeneration.

Preclinical results shown below demonstrate that PXL065 and pioglitazone normalize elevated VLCFA levels in patient derived cells, and that an increase in the compensatory transporter ABCD2 may be involved. In vivo in the ABCD1 mouse, PXL065 also produced substantial reductions in elevated VLCFA in plasma, brain, and in the spinal cord; these effects were greater than observed with pioglitazone, the parent compound studied at the same dose. Additional experimental results included an observed improvement in neural histology and neuro-behavior in ABCD1 null mice following chronic PXL065 treatment.

Recent clinical results reported by the biotechnology company Minoryx with a related molecule, Leriglitazone, also support the potential utility of D-TZDs and PXL065 in particular in ALD. Although the Leriglitazone trial did not meet its primary endpoint, several signs of efficacy were observed as shown below. However, unlike PXL065, Leriglitazone is a potent PPARγ agonist and produces weight gain and edema. PXL065 is designed to avoid significant weight gain or edema (based on dialing out PPARγ action) and has the potential for greater efficacy. 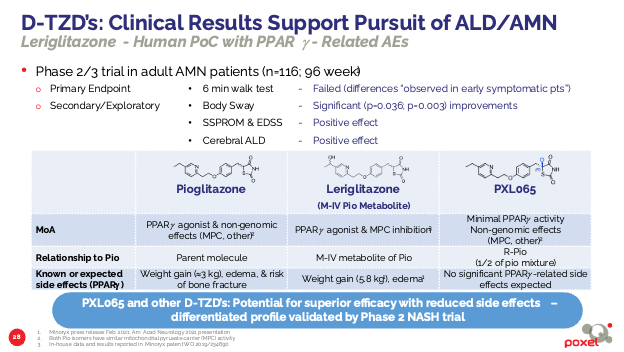 ADPKD is the fourth leading cause of renal failure and the most common inherited cause of kidney disease. In ADPKD, fluid-filled cysts develop and enlarge in both kidneys, eventually leading to kidney failure. Other complications and clinical manifestations include: abdominal pain, urinary symptoms, liver cysts and cardiovascular disorders. More than 50 percent of people with ADPKD will develop kidney failure by age 50. Once a person has kidney failure, dialysis or a transplant are the only options. 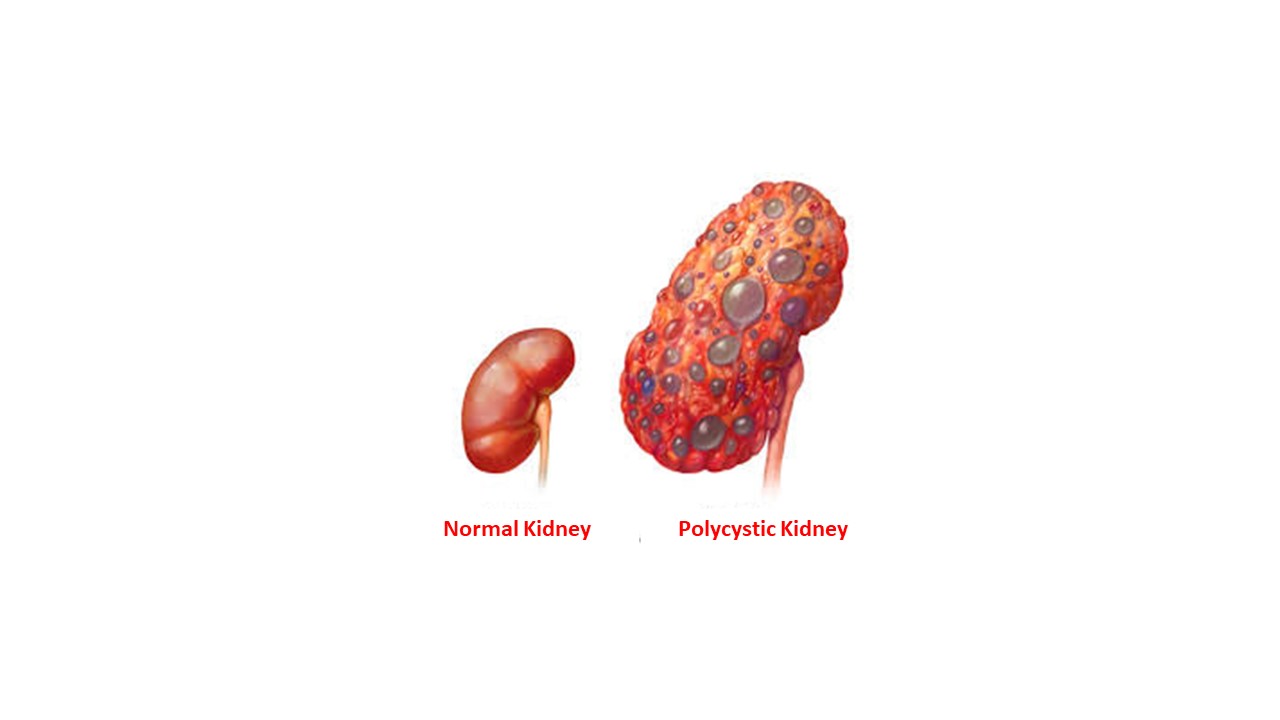 The pathophysiology of ADPKD involves altered kidney metabolism and there is a strong rationale for AMPK activation as a therapeutic approach. Having completed the preclinical assessment of PXL770 in ADPKD demonstrating compelling benefits of strong suppression of cyst formation in vitro and in vivo, PXL770 is a Phase 2 ready program. In H2 2022, the U.S. Food and Drug Administration (FDA) granted Orphan Drug Designation to PXL770 for the treatment of patients with ADPKD. 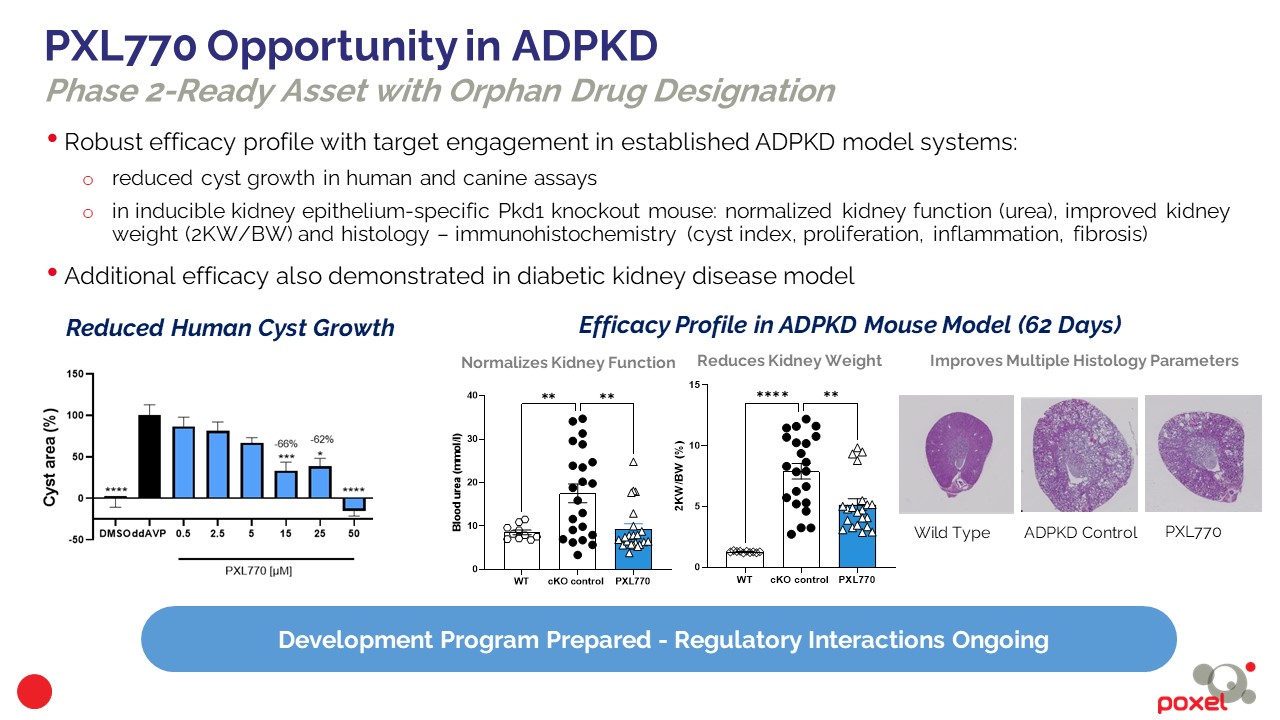