A new drug application for TWYMEEG Tablets 500mg1 (International Nonproprietary Name (INN): Imeglimin hydrochloride), for the treatment of type 2 diabetes, was approved in Japan in June 2021. Japan is the first country in the world to approve Imeglimin. Sumitomo Dainippon Pharma, the diabetes market leader in Japan, launched TWYMEEG in September 2021.

The TWYMEEG approval is supported by numerous preclinical and clinical studies, including the Phase 3 TIMES (Trials of IMeglimin for Efficacy and Safety) program managed jointly by Poxel and Sumitomo Dainippon Pharma, which included three pivotal trials to evaluate TWYMEEG’s efficacy and safety in over 1,100 patients. In all three trials, TWYMEEG met its primary endpoints and objectives and was observed to exhibit a favorable safety and tolerability profile.

We believe it is the only oral compound with a dual mechanism of action that is directly designed both to increase insulin secretion in response to glucose and to improve insulin resistance. The mitochondrion is the power station of the cell and its dysfunction is implicated in the pathophysiology of type 2 diabetes. By targeting the mitochondria – where dysfunction is a key feature of diabetes pathophysiology, Imeglimin can simultaneously promote insulin secretion from pancreatic b-cells in response to elevated glucose while also alleviating insulin resistance as summarized in the figure below. 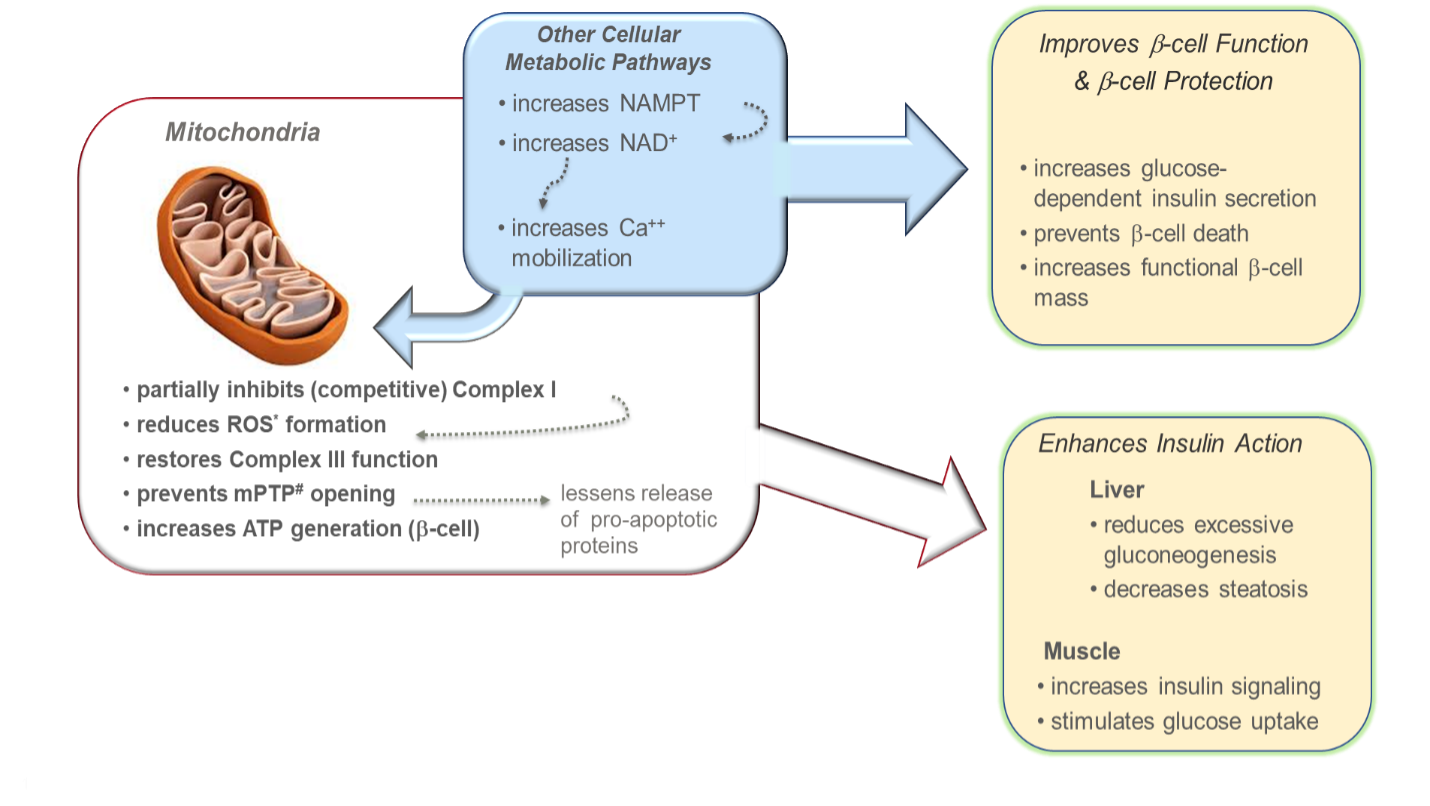 As a consequence of these effects, we believe that Imeglimin has the potential to slow disease progression and provide therapeutic options to patients who no longer respond to current treatments. It may also have the potential to complement existing treatments and to impact cardio-renal complications of diabetes.

To date, Imeglimin has been evaluated in 28 clinical trials and administered to an aggregate of 400 non-diabetic subjects and over 1,800 type 2 diabetes patients in the US, Europe and Japan. Imeglimin has been well-tolerated in these trials and we have observed statistically significant reductions of hemoglobin A1c, or HbA1c, and other glycemic parameters versus placebo.

1 Dosage and administration: In general, for adults, 1,000 mg of Imeglimin hydrochloride is orally administered twice daily in the morning and evening.

According to Decision Resources, Japan is the second largest diabetes market worldwide, behind the United States, with a compounded annual growth rate of more than 18% between 2008 and 2012, and could grow by more than 20% by 2023. It is estimated that there are currently over 10 million diabetic patients in Japan and sales in this market exceeded $4 billion in 2020. The Japanese diabetes market has specific pricing and reimbursement characteristics that could allow a rapid market uptake for new innovative products. We believe that this market trend is likely to continue given that the Japanese government has identified diabetes as a target disease in its ten-year plan for National Health Promotion 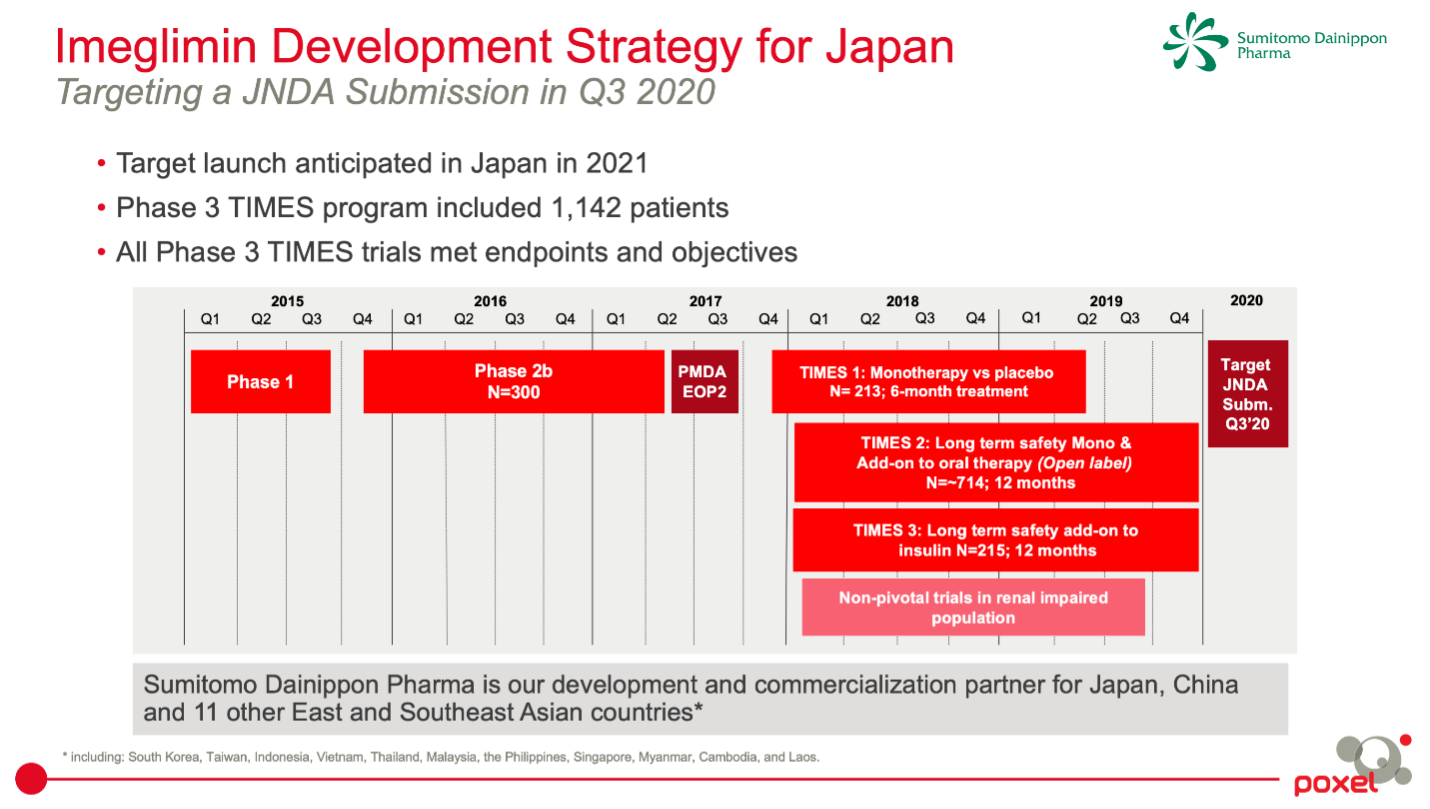 The TIMES program consists of the following three trials, each performed with the dose of 1,000 mg orally administered twice-a-day or bid.

In this randomized, double-blind, placebo-controlled monotherapy trial, 1,000 mg of Imeglimin was orally administered twice-daily versus placebo for 24 weeks in 213 Japanese patients. 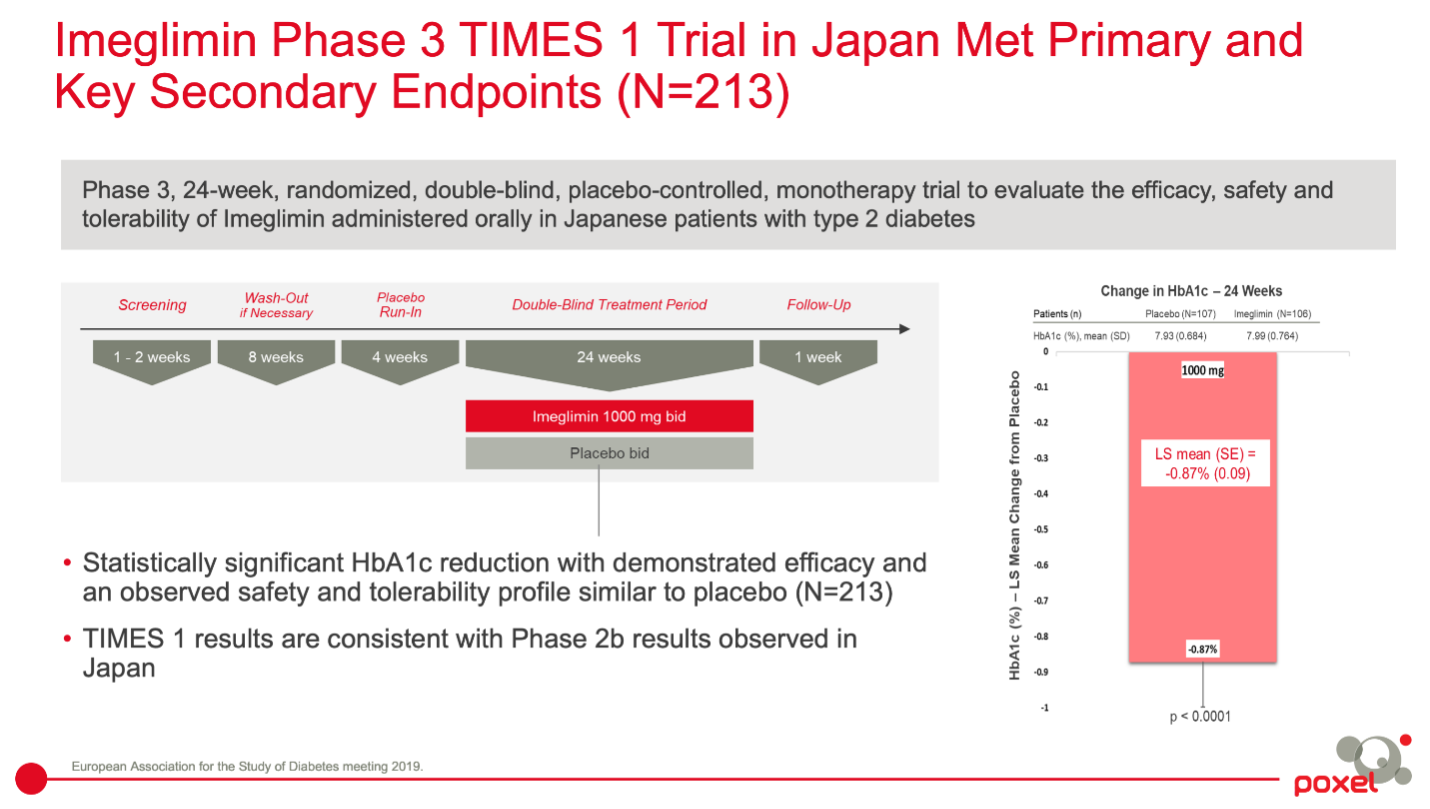 As shown above, the TIMES 1 trial was observed to meet its primary endpoint, with a statistically significant (p<0.0001) HbA1c placebo-corrected mean change from baseline of -0.87%, as well as its main secondary endpoints including Fasting Plasma Glucose. Safety and tolerability were good, similar to placebo.

This 52-week, open label, parallel-group TIMES 2 trial evaluated the long-term safety and efficacy of Imeglimin in 714 Japanese patients with type 2 diabetes. In this trial, 1,000 mg of Imeglimin was orally administered twice daily in combination with existing antihyperglycemic agents. Imeglimin was observed to show an HbA1c decrease from baseline ranging from -0.56 to -0.92% with Imeglimin as an add-on to several existing oral antihyperglycemic agents, as shown in the chart below: 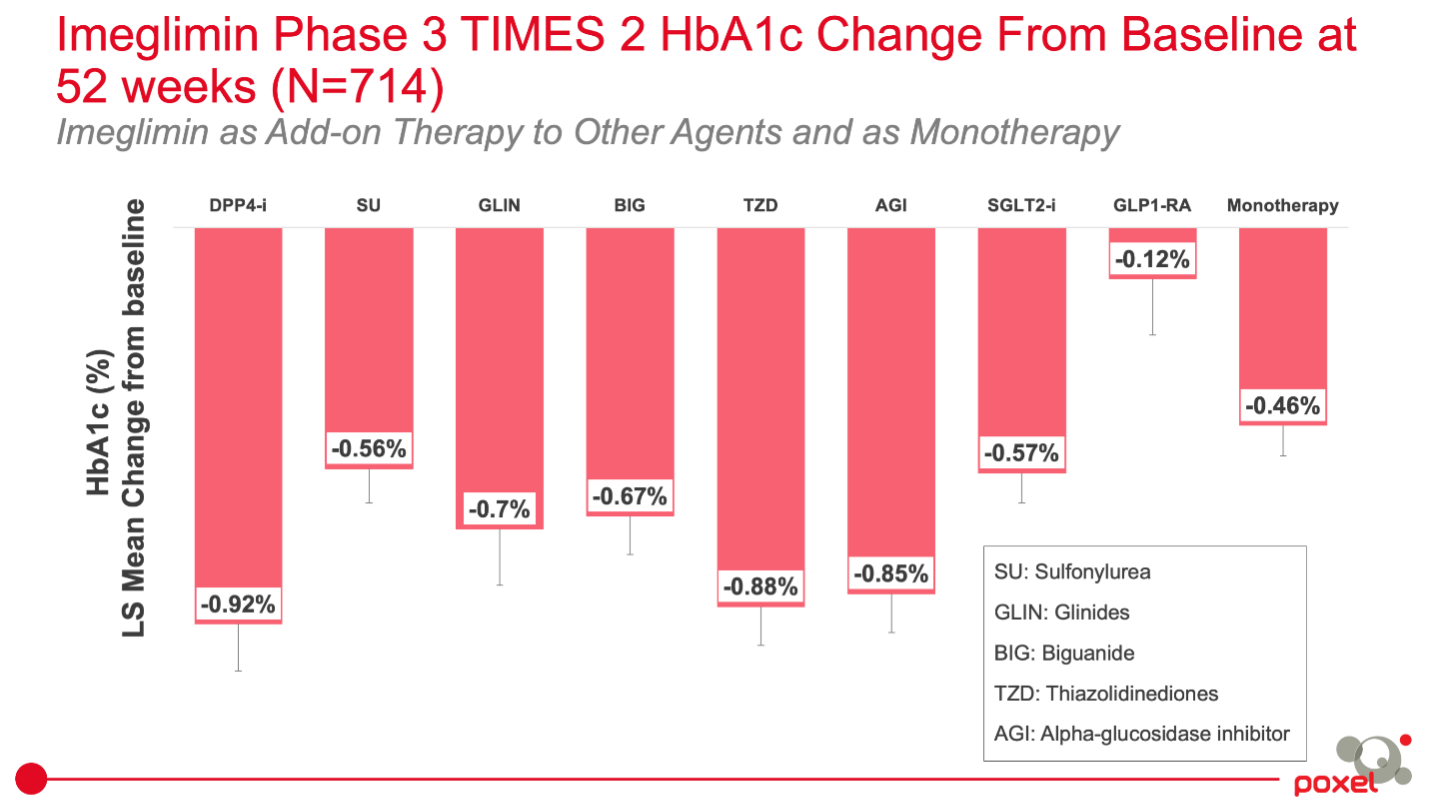 The first 16-week portion of this double-blind, placebo-controlled, randomized trial evaluated efficacy and safety of Imeglimin versus placebo in 215 patients when added to insulin therapy in Japanese patients with type 2 diabetes associated with insufficient glycemic control.

Here, the overall tolerability and adverse event profile of Imeglimin was observed to be similar to placebo. A similar number of patients experienced hypoglycemia with Imeglimin compared to the placebo group with a fixed insulin daily dose as defined in the protocol. There were no severe hypoglycemia events and the majority of the hypoglycemia events reported were mild. 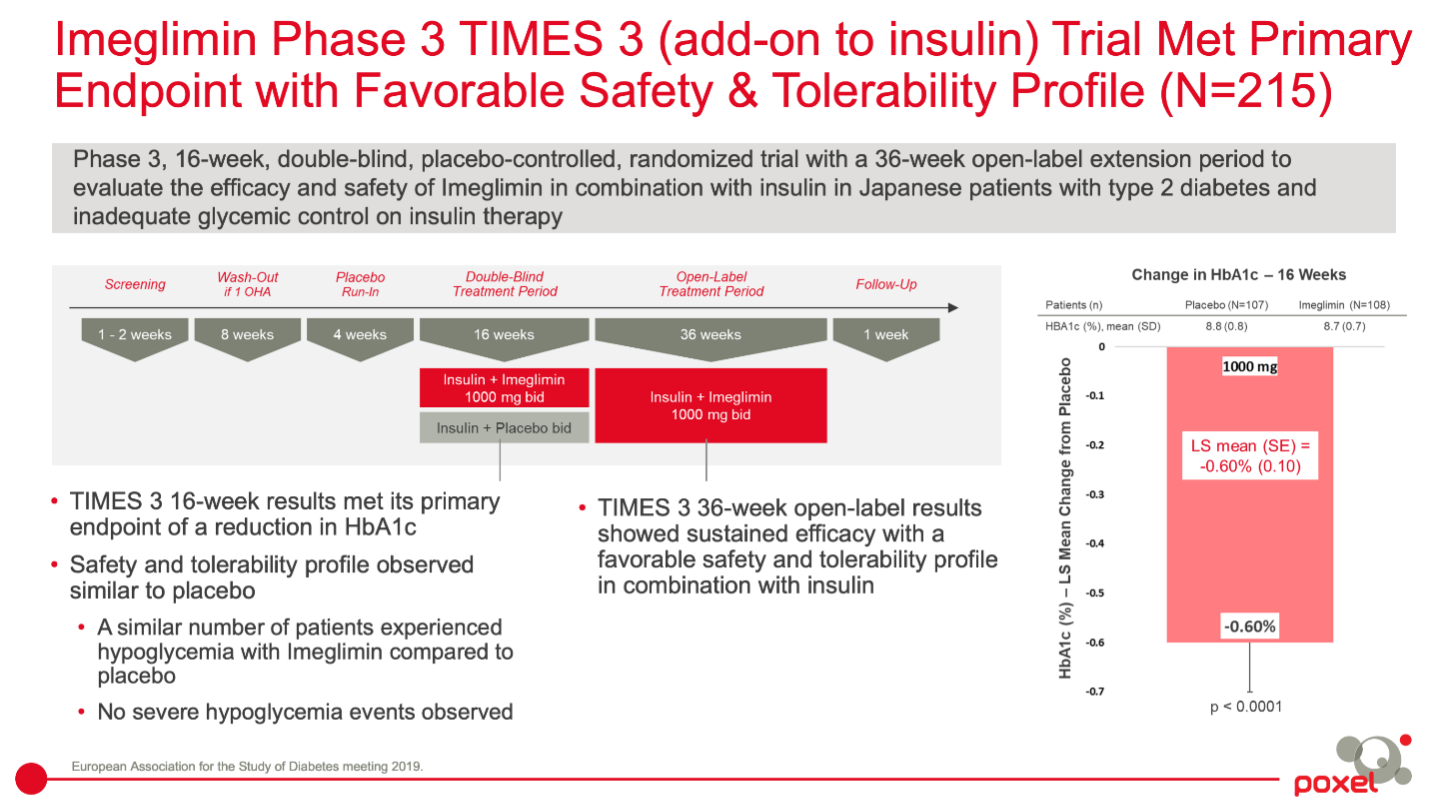 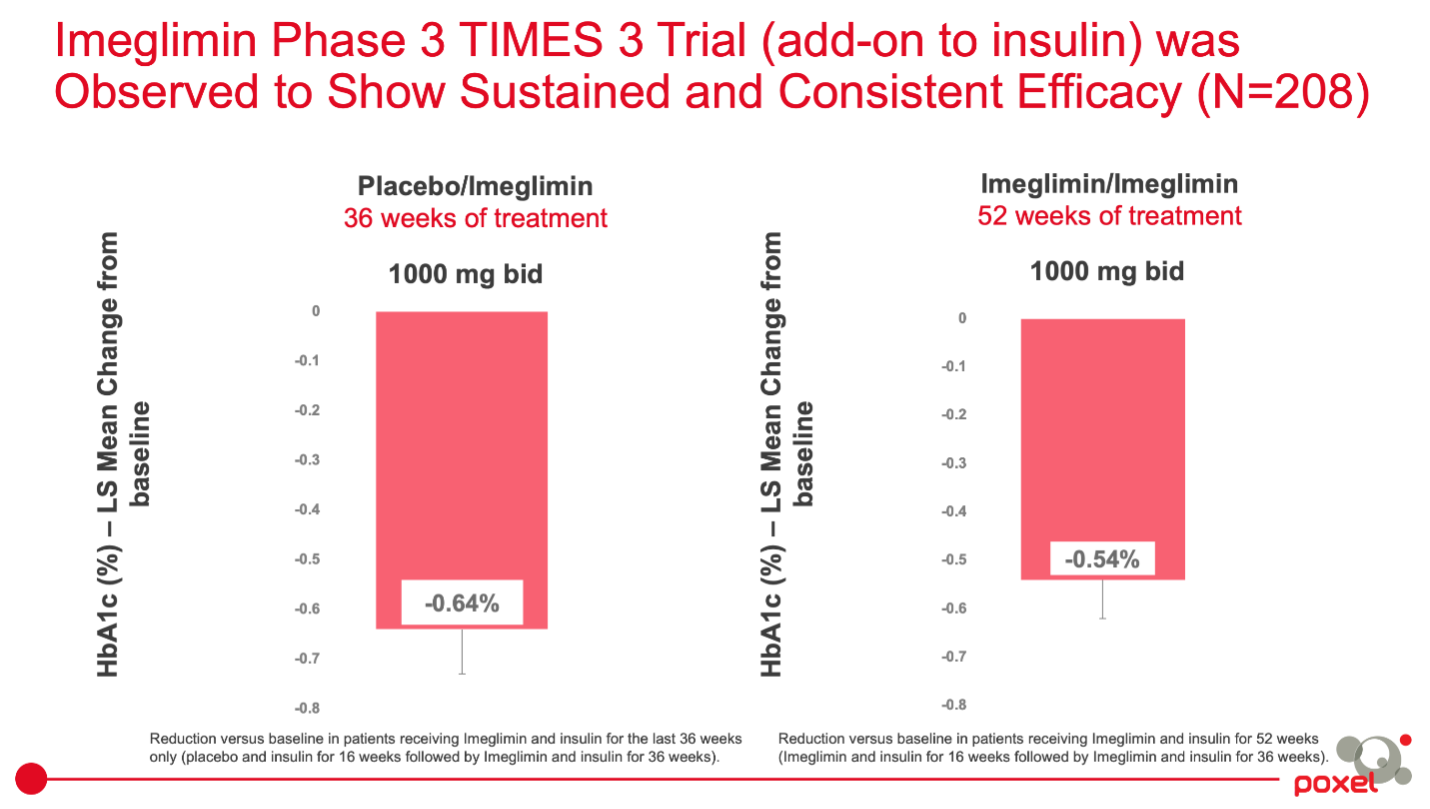 We believe that Imeglimin has the potential to target the estimated 29 million patient population in China being treated with Western drugs, as well as the sizeable patient population with co-existing chronic kidney disease (CKD). In line with China’s national plan for non-communicable disease prevention and treatment, we also expect more type 2 diabetes patients to have access to antidiabetic medications. For China and other East and Southeast Asian countries that our partner Sumitomo Dainippon Pharma has rights to, they plan to discuss the development plan with regulatory authorities and the ability to leverage data generated in Japan and other countries.

For the United States, Europe and all other countries not covered by the Sumitomo Dainippon Pharma agreement, Poxel regained Imeglimin rights in Q1 2021 and is considering opportunities to leverage the Imeglimin data package in specific territories, including those resulting from inbound interest.

Its previous partner, Metavant, a subsidiary of Roivant, had been in discussions with the U.S. Food and Drug Administration, which has provided a pathway forward for Imeglimin in a Phase 3 plan which would evaluate type 2 diabetes patients with chronic kidney disease (CKD) stages 3b/4. Results from a pharmacokinetics, or PK, and pharmacodynamics, or PD, trial of Imeglimin in this population showed that Imeglimin was well-tolerated with a safety profile consistent with that observed in previous trials to date.

Approximately 2.4 million adults in the United States have type 2 diabetes and chronic kidney disease (CKD) stages 3b/4, according to the Centers for Disease Control and Prevention, and these patients have increased cardiovascular, or CV risk and challenging glucose management requirements. We believe that there is a need for a new treatment for patients with type 2 diabetes and advanced CKD, one that can provide efficacy and a safety profile with significantly reduced hypoglycemia risk.

As a consequence of these limitations, the segment of type 2 diabetes patients with CKD stages 3b/4 currently face limited therapeutic options for the management of their disease. Imeglimin’s mechanism of action, supported by non-clinical data and clinical findings, offers the potential for effective glycemic control in patients with CKD stages 3b/4.