Non-alcoholic steatohepatitis (NASH) is a metabolic liver disease that is quickly becoming a worldwide epidemic. It is characterized by the accumulation of fat in the liver causing inflammation, cell death and fibrosis. The disease can be silent for a long period of time, but may progress towards severe damage and liver fibrosis, which ultimately can even result in liver failure and/or liver cancer. Typical risk factors for NASH include insulin resistance, obesity, elevated levels of blood lipids (such as cholesterol and triglycerides) and diabetes. Currently no curative or specific therapies are available.

NASH is a more severe form of non-alcoholic fatty liver disease (NAFLD). These liver diseases result in cases of cirrhosis and hepatocellular carcinoma. According to published estimates, about 10% to 30% of NAFLD patients also suffer from NASH and approximately 40-50% of patients with NASH have co-existing type 2 diabetes.

PXL065 is a novel, first-in-class, oral agent with potential therapeutic utility for the treatment of NASH.

PXL065, a New Approach for the Treatment of NASH

PXL065 offers a new approach for the treatment of NASH. PXL065 is the R stereoisomer (deuterium modified single R-isomer) of pioglitazone. Its parent molecule, pioglitazone (Actos®) has been marketed since 1999 for the treatment of type 2 diabetes. Pioglitazone is a mixture, in equal proportions, of two mirror molecules (R and S stereoisomers) that interconvert in vivo. Like other thiazolidinedione (TZD) molecules, pioglitazone targets activation of PPARγ and also mediates non-genomic actions with pathways that include modulating the mitochondrial pyruvate carrier (MPC). Pioglitazone has been the subject of a large number of Phase 2, .3 and 4 clinical trials for the treatment of NASH, which have demonstrated its ability to target disease resolution and reduce the progression of fibrosis. It is the only drug recommended for biopsy-proven NASH patients by the Practice Guidelines published by the American Association for the Study of Liver Diseases (AASLD) and the European Association for the Study of the Liver (EASL).

However, its use is restricted due to the adverse effects caused by the activation of PPARγ receptors, such as weight gain, bone fractures and fluid retention (edema). PXL065, the deuterium-modified R stereoisomer, has little or no observed PPARγ activity or associated adverse effects that appear to be related to the S stereoisomer of pioglitazone. In preclinical models, PXL065 retains the NASH efficacy of pioglitazone via non-genomic pathway actions and was observed to produce little or no weight gain or fluid retention. PXL065 is a new chemical entity (NCE) with composition of matter IP.

In 2022, a new U.S. patent was issued that describes a specific form of PXL065 with unique properties that provides additional protection through 2041 and could expand protection for PXL065 worldwide, with the potential for an additional 5 years through patent term extension.

NASH Phase 2 (DESTINY 1 trial) results available to-date show statistically significant effects of PXL065 on liver fat content, biomarkers related to liver fibrogenesis-fibrosis risk, as well as positive effects on fibrosis and other key parameters based on histology analysis. Relative to published data for pioglitazone, reduced potential for weight gain and edema was also evident. Based upon preclinical, Phase 1 and Phase 2 results, Poxel believes that PXL065 may have a better therapeutic profile than pioglitazone for NASH. 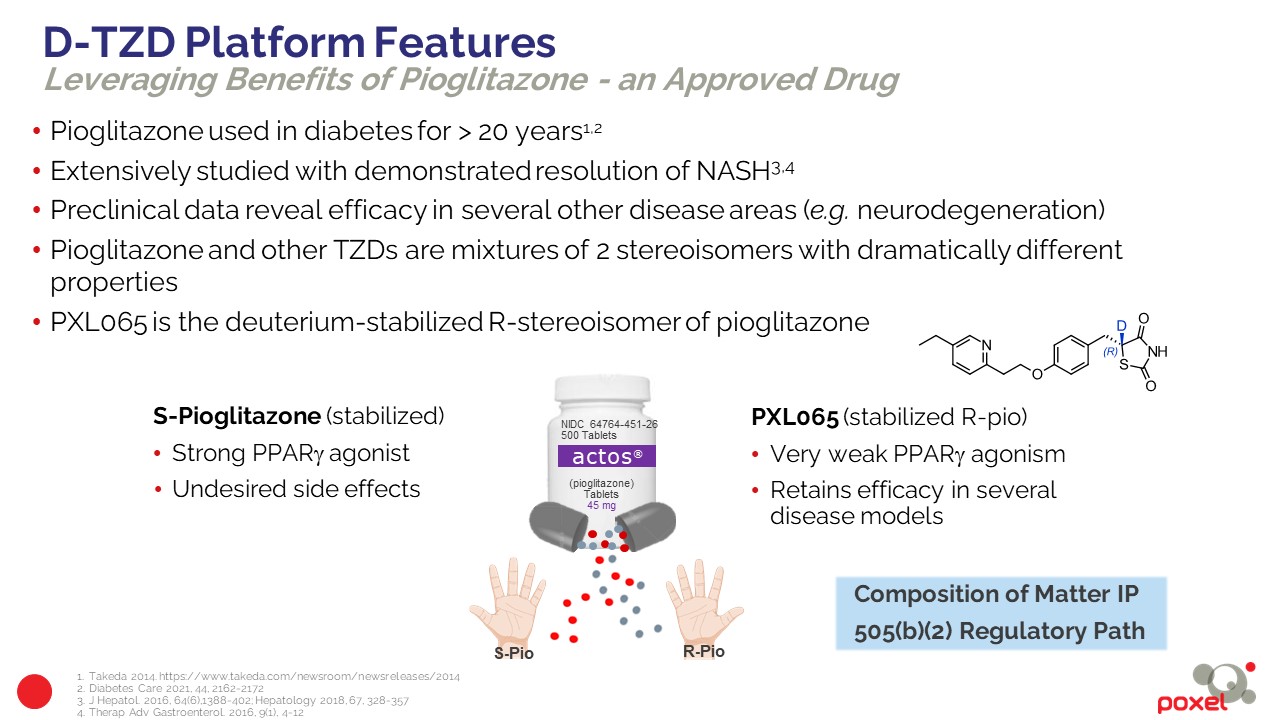 PXL065 is being developed using the 505(b)(2) new drug approval path, an expedited FDA pathway that allows sponsors to cite and leverage pre-existing public data of a closely related reference molecule – in this case pioglitazone (including preclinical and clinical safety).

In Q3 2022, we reported positive results from a streamlined Phase 2 trial (DESTINY1) where the primary efficacy endpoint for liver fat content reduction at 36-weeks was achieved for all doses. Histology findings from paired liver biopsies showed strong improvement in fibrosis without worsening of NASH, consistent with dose-dependent reduction of all biomarkers related to fibrogenesis and fibrosis risk score. Improvement was observed in other NASH histology components. The results confirm PXL065’s potential to retain the beneficial hepatic and metabolic effects of pioglitazone with reduced PPARg-driven side effects of body weight gain and edema. Based on these positive results, PXL065 is prioritized for further development in NASH and we have initiated discussions for a potential pivotal program in NASH, including discussions with potential partners.

The Phase 2 36-week trial in noncirrhotic biopsy-proven NASH patients assessed three doses of PXL065 compared to placebo. 117 subjects were randomized to one of 4 daily (QD) treatment arms (7.5 mg, 15 mg, 22.5 mg, placebo). Analysis of histologic changes was based on paired liver biopsies in PXL065 vs. placebo-treated NASH patients before and after the 36-week treatment period. This trial was not powered to detect statistically significant changes in histology endpoints. The Phase 2 trial design for PLX065 is shown below: 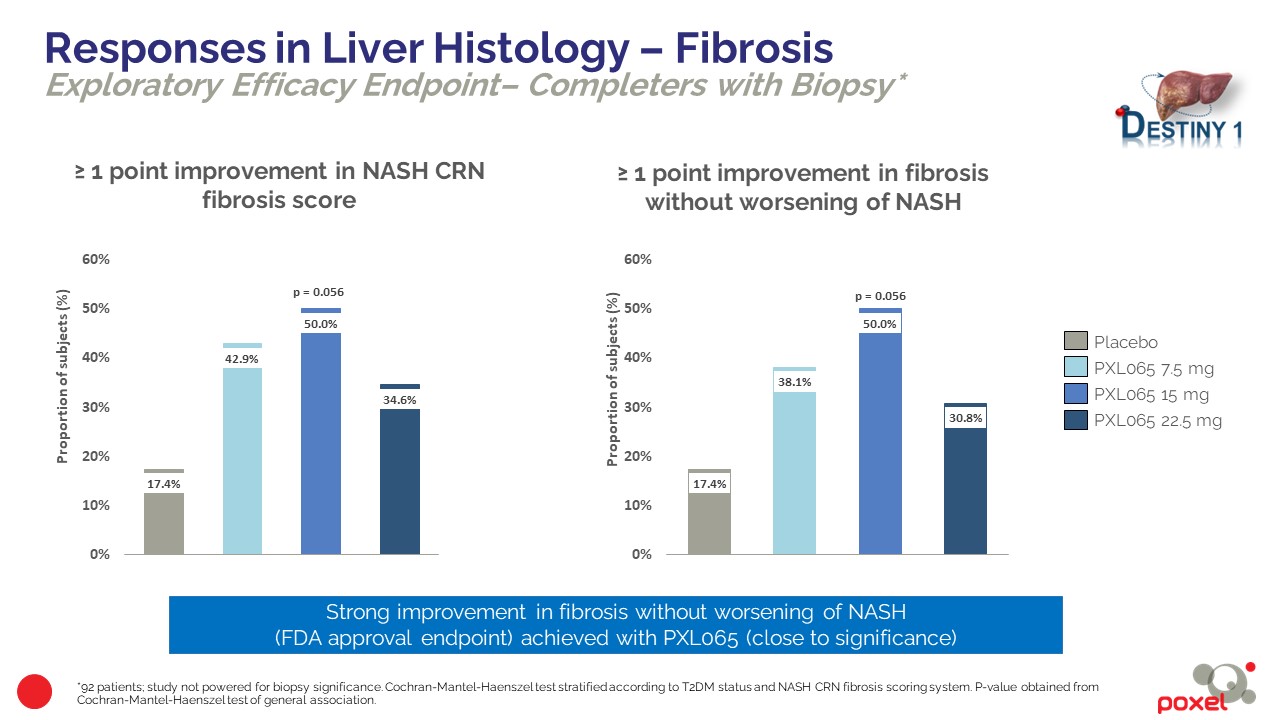 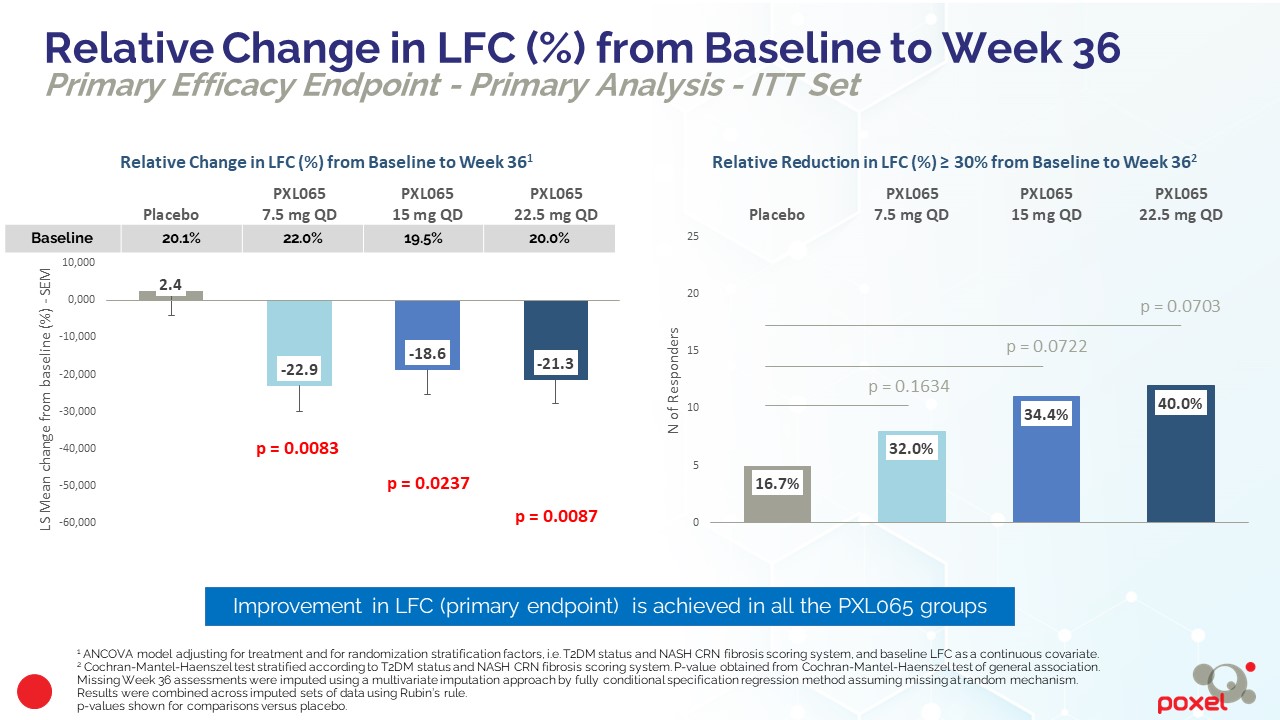 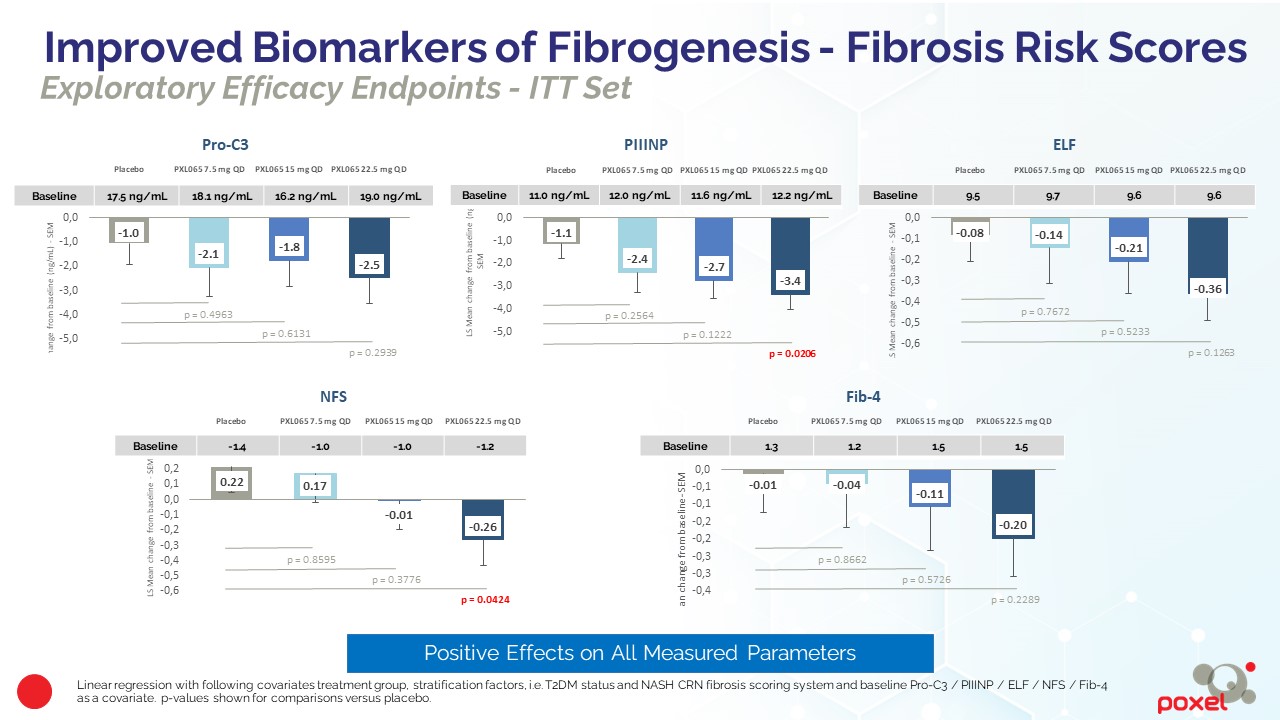 The previous Phase 1 program for PXL065 consisted of several trials in healthy subjects that were designed to assess safety and pharmacokinetics. The Phase 1 program also included pioglitazone as an active comparator. In addition, exposure to known metabolites was compared with equivalent doses of PXL065 and pioglitazone. Based on these Phase 1 results, a PK model was generated to predict the dose of PXL065 that would produce the same exposure to R-pioglitazone as the 45 mg dose of pioglitazone, as well as the number of days of use of the drug required to achieve this equilibrium. The PK results and simulations in humans, associated with preclinical animal studies, also suggest that PXL065 (at approximately 15 mg daily) could potentially have the same efficacy in NASH as pioglitazone, but with fewer PPARg receptor-related adverse effects, such as weight gain and fluid retention. In the Phase 1 program, PXL065 was well-tolerated, with no serious adverse events.

As displayed in the charts below from a multiple dose Phase 1 study, the PK assessment showed that PXL065 plasma exposure increased in a dose-proportional manner up to 30mg, the highest dose tested, when using a tablet formulation. Stabilization of R-pioglitazone (R-pio) with deuterium was observed at all doses tested; thus there was minimal exposure to the PPARg-active S-stereoisomer with relatively greater exposure to the R-isomer. 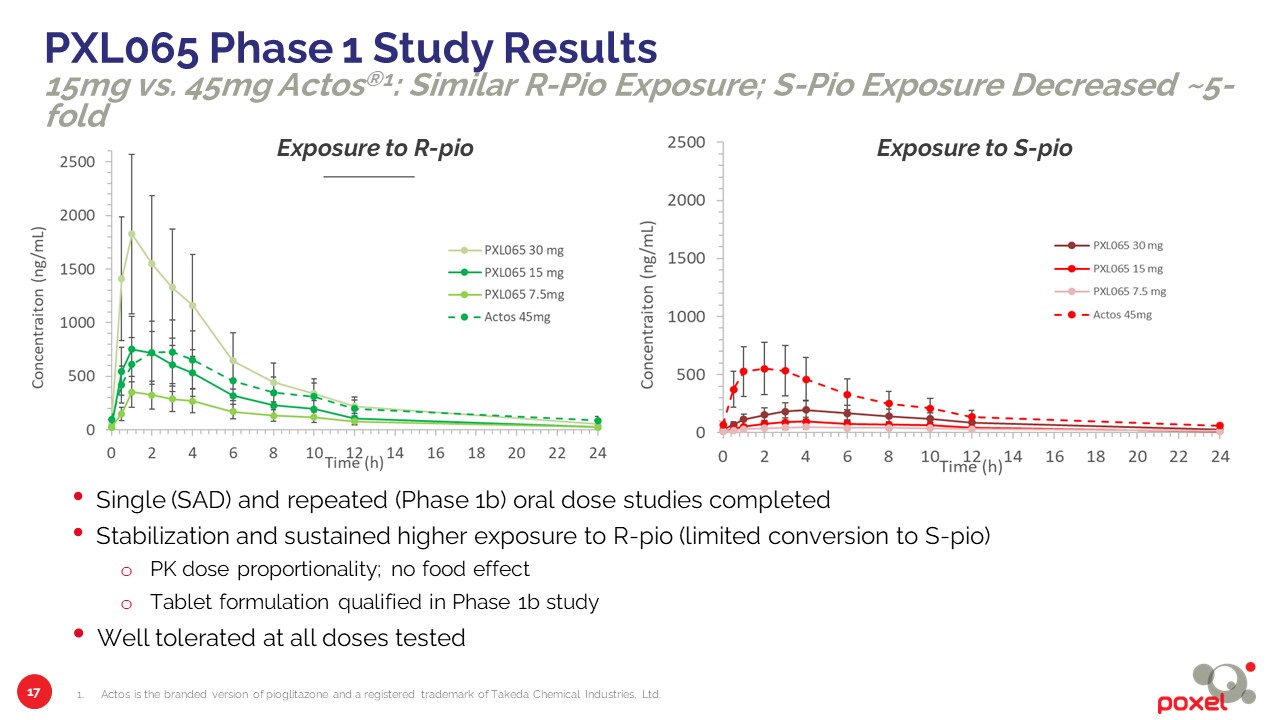