A Potential Breakthrough Therapy for Chronic Metabolic Disorders, including NASH

PXL770 is a novel drug candidate that directly activates adenosine monophosphate-activated protein kinase (AMPK). AMPK is a central regulator of multiple metabolic pathways leading to the control of lipid metabolism, glucose homeostasis and inflammation. Based on its central metabolic role, we believe that targeting AMPK offers the opportunity to pursue a wide range of indications to treat chronic metabolic diseases, including diseases that affect the liver, such as NASH.

Direct activation of the AMPK enzyme has the potential to treat the root causes of NASH by triggering benefits on the main pathophysiologic processes occurring in the liver and leading to NASH: steatosis, inflammation, ballooning and fibrosis. 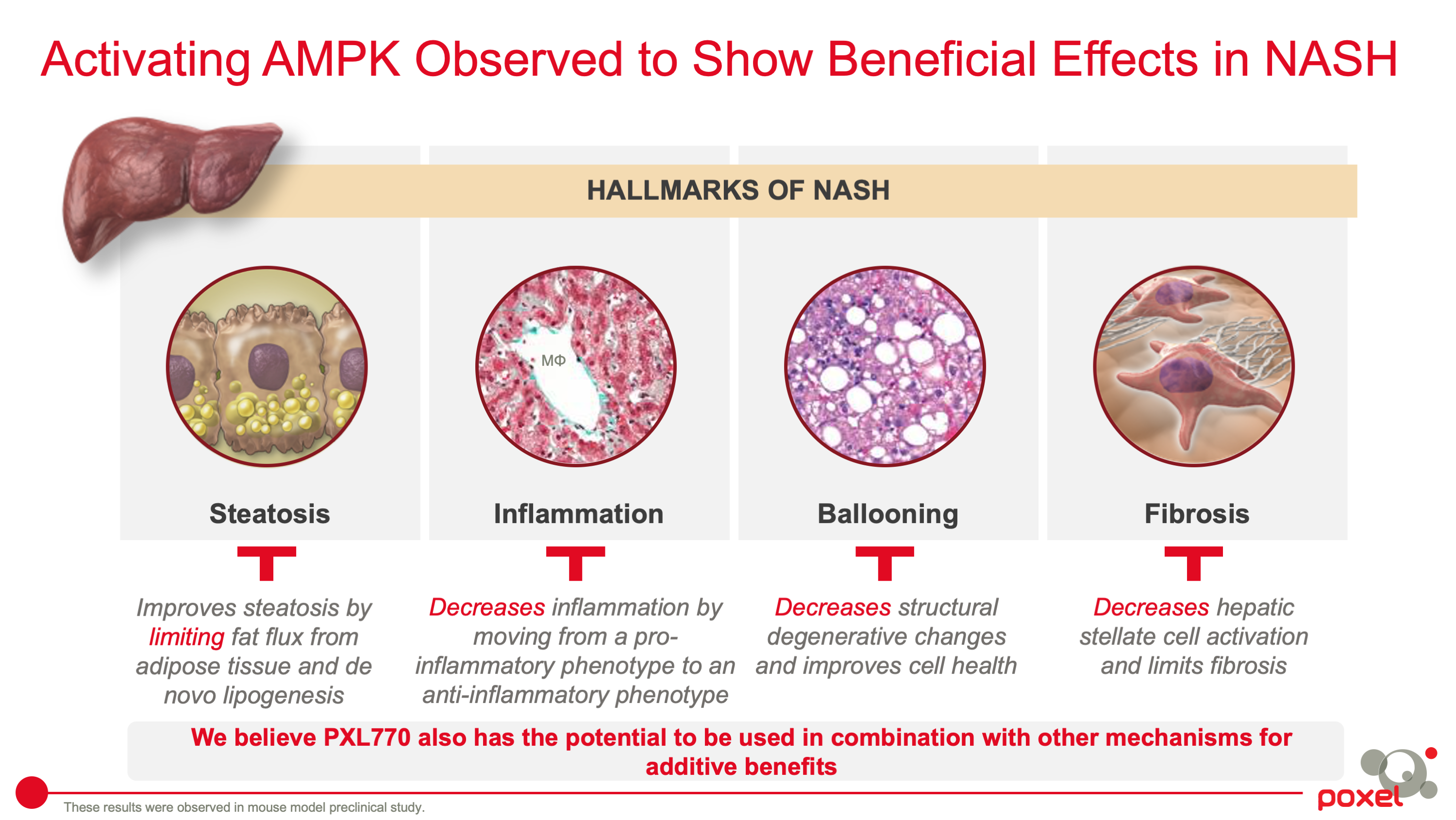 By directly targeting the primary regulator of cellular energy, we believe that PXL770 is well positioned for the treatment of NASH. Based on results from multiple preclinical models for PXL770 and published literature that are consistent with potential clinical beneficial effects, we believe that AMPK activation could play a beneficial role in the metabolic and inflammatory pathways that lead to liver injury and NASH. Based on clinical trials and preclinical studies to date, PXL770 has been observed to:

The results from multiple preclinical studies have demonstrated a beneficial effect of the activation of AMPK in NASH models. The charts below show a summary of promising preclinical results. 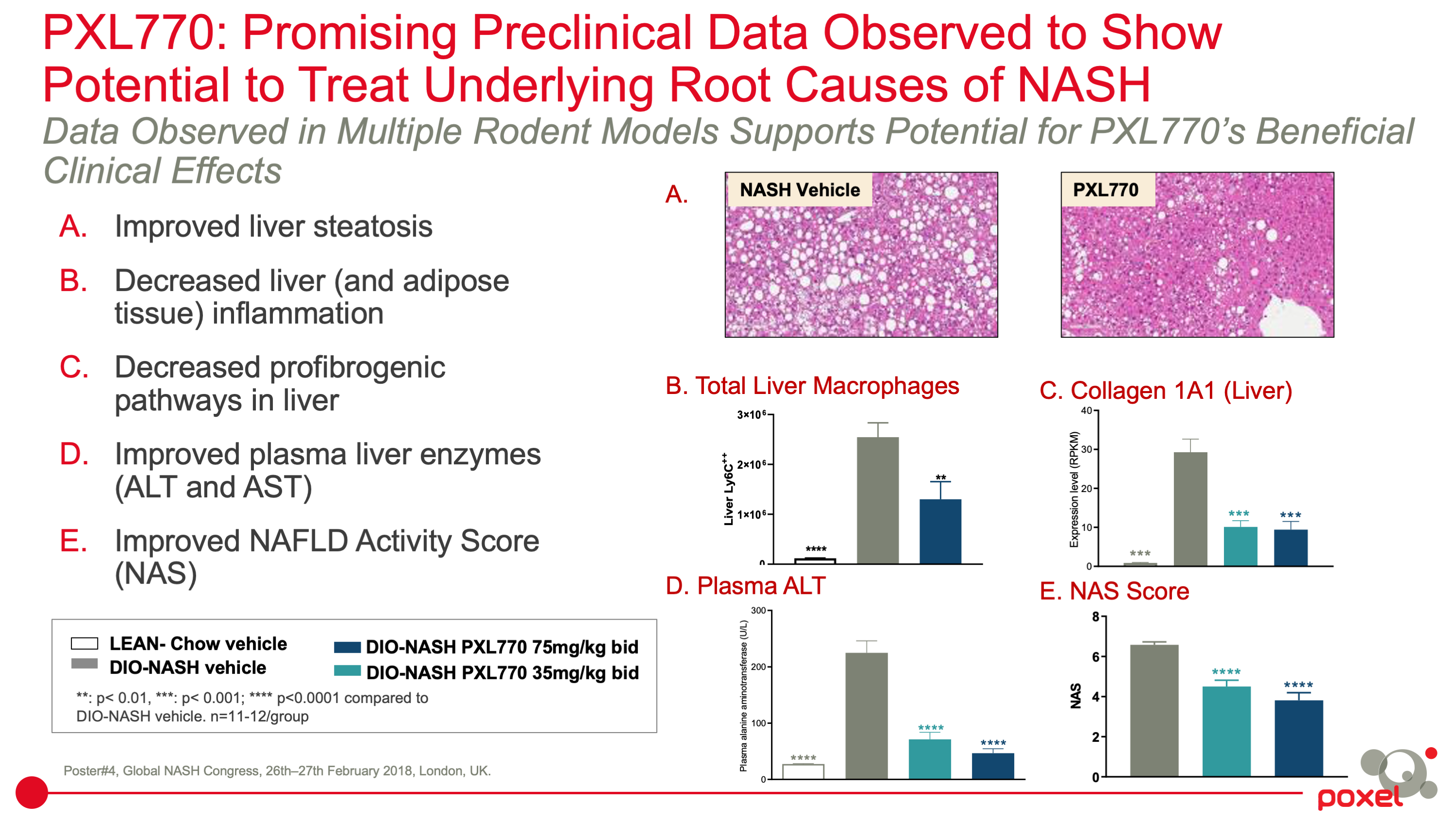 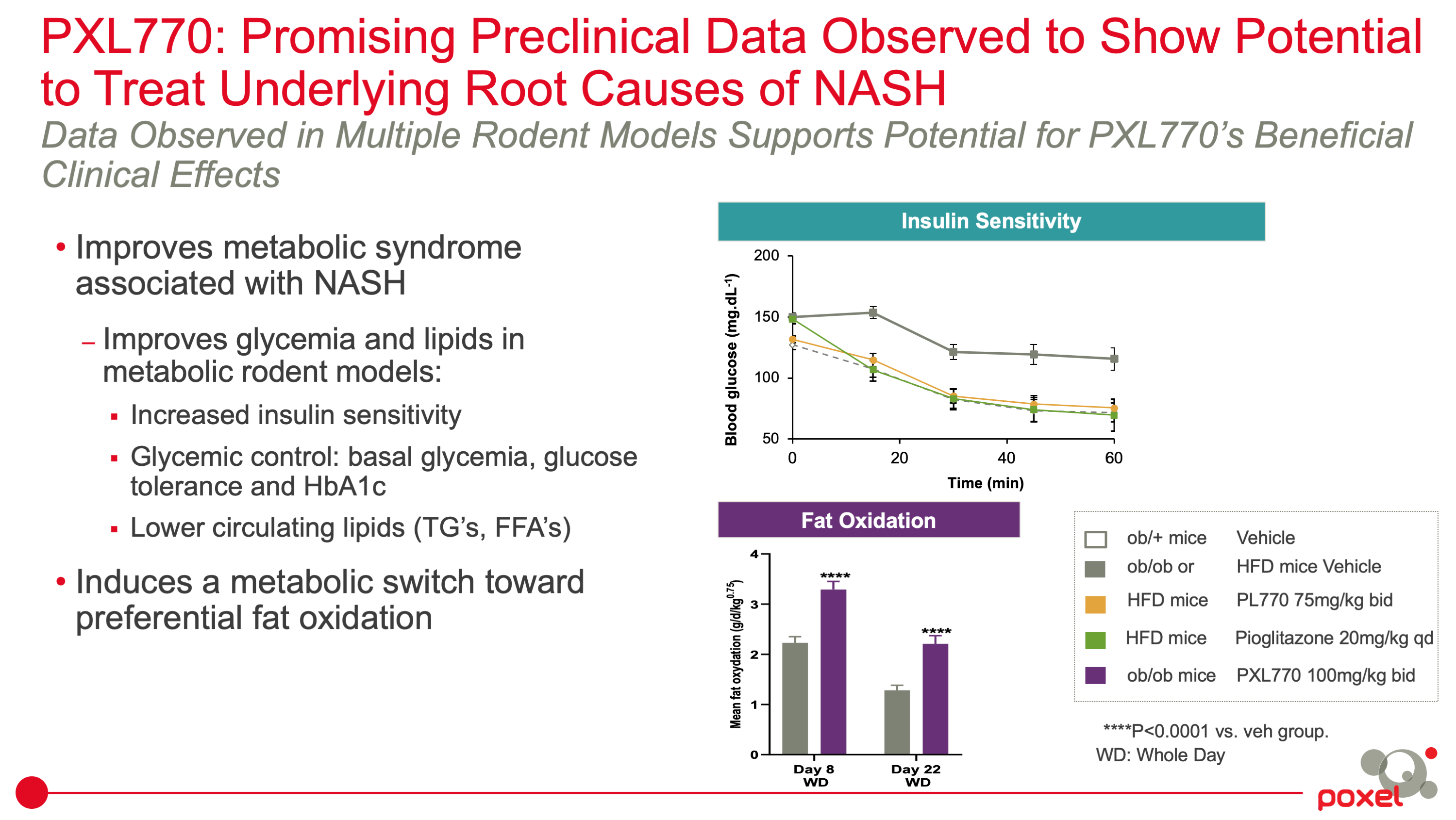 In July 2018, we announced results of our two-part Phase 1b trial of PXL770, consisting of a trial with multiple ascending doses and a drug interaction trial. The multiple ascending doses trial was conducted in 48 subjects to evaluate the safety, tolerability and PK of PXL770 administered once or twice daily for 10 days, with six dose groups ranging from 60 mg to 500 mg.

No serious adverse events and no adverse events leading to discontinuation of the trial in subjects were observed in this trial. PXL770 was well-tolerated up to the highest dose of 500 mg, without meeting the criteria for stopping the dose increase. In this trial, an electrocardiogram, or ECG, was performed at each dose, and PXL770 was not associated with any prolongation of the QT interval, which is a cardiac safety measurement, or any changes in other ECG parameters. The PK parameters of PXL770 were linear with a saturation tendency at the highest dose tested.

In addition to the trial with multiple ascending doses, a drug interaction trial was also conducted with rosuvastatin, a statin that is also a substrate for OATP (organic anion transporting polypeptides) transporters and that can cause PK interactions when co-administered with other drugs and is commonly used in clinical trials to assess drug interaction with statins. In this trial, 12 subjects received 250 mg of PXL770 and a standard dose of rosuvastatin once daily. There were no observed PK interactions between PXL770 and OATP transporter substrates.

Based on the results of the Phase 1b trial and the tolerability profile observed in the Phase 1a single ascending dose trial, we launched a Phase 2a proof-of-concept study and a pharmacokinetic and pharmacodynamic (PK/PD) trial, which are described in the chart below. 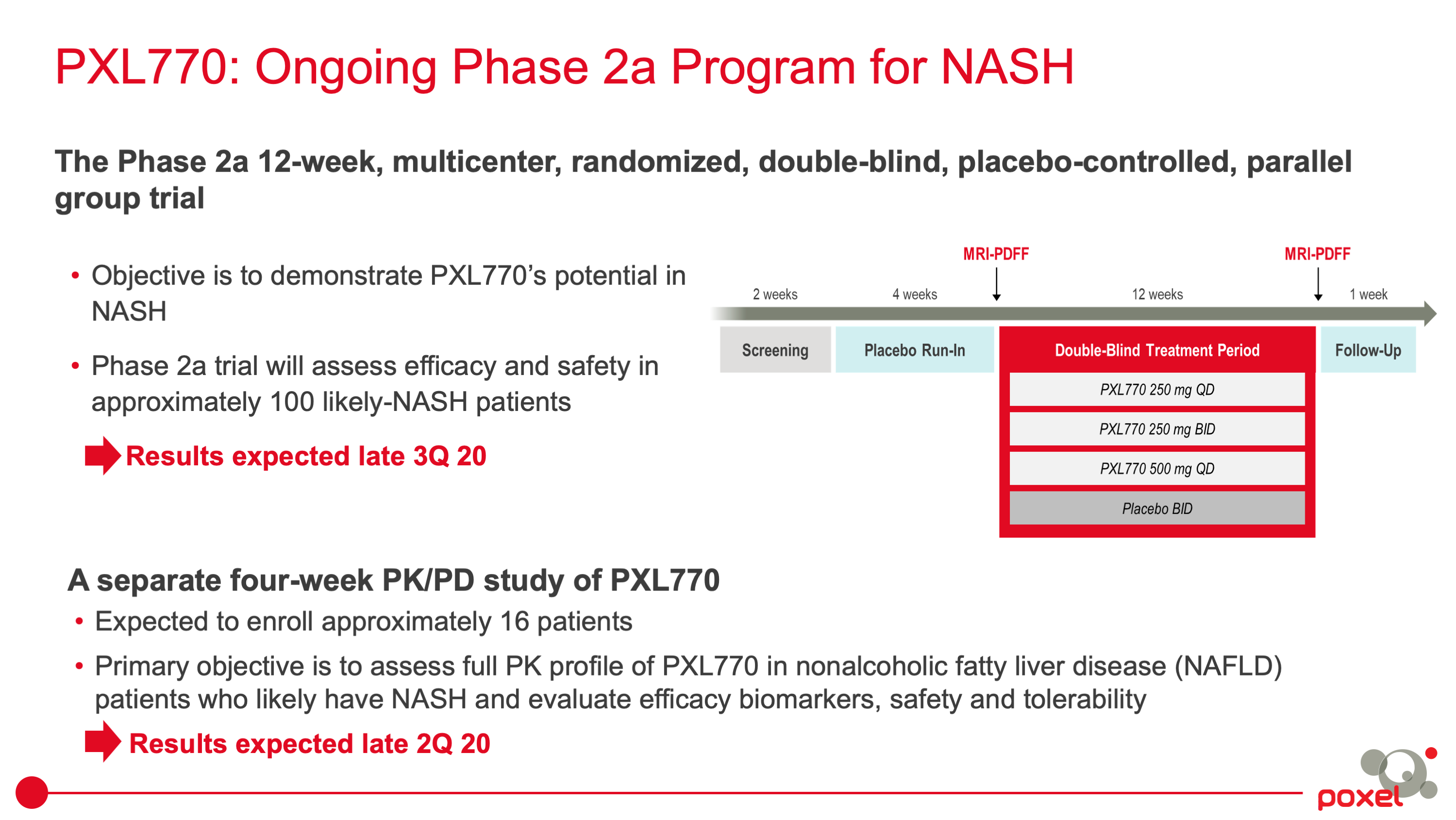 Given the mechanistic heterogeneity of NASH, we believe there is a need for combination approaches that target multiple pathways in the disease’s progression. Our two lead products in NASH target distinct pathways, and we believe that the differentiated profiles of PXL770, which allosterically activates AMPK to mitigate metabolic overload in liver cells, and of PXL065, which inhibits MPC to prevent liver inflammation and fibrosis, are well-suited for use as a combination therapy, if approved. To this end, we are currently conducting preclinical studies for PXL770 and PXL065 in combination together and with other therapies using other mechanisms of action that we believe could have additive or synergistic benefits for the treatment of NASH.

Non-alcoholic steatohepatitis (NASH) is a metabolic disease with no clear disease origin that is quickly becoming a worldwide epidemic. It is characterized by the accumulation of fat in the liver causing inflammation and fibrosis. The disease can be silent for a long period of time, but may progress towards severe damage and liver fibrosis, which ultimately can even result in liver failure and/or liver cancer. Typical risk factors for NASH include obesity, elevated levels of blood lipids (such as cholesterol and triglycerides) and diabetes. Currently no curative or specific therapies are available.

NASH is a severe form of NAFLD. These liver diseases aggravate cases of cirrhosis and hepatocellular carcinoma. According to published estimates, about 10% to 30% of NAFLD patients also suffer from NASH.