PXL065, a New Approach for the Treatment of NASH

PXL065 offers a new approach for the treatment of NASH. PXL065 is the R stereoisomer (deuterium stabilized single R-isomer) of pioglitazone and its parent molecule has been marketed since 1999 for the treatment of type 2 diabetes. Pioglitazone is a mixture, in equal proportions, of two mirror molecules (R and S stereoisomers) that interconvert in vivo and it targets both inhibition of the mitochondrial pyruvate carrier (MPC) and activation of PPARy. Pioglitazone has been the subject of a large number of Phase 2, 3 and 4 clinical trials for the treatment of NASH, which have demonstrated pioglitazone’s ability to target disease resolution without aggravating fibrosis. It is the only drug recommended for biopsy-proven NASH patients by the Practice Guidelines published by the American Association for the Study of Liver Diseases (AASLD) and the European Association for the Study of the Liver (EASL). 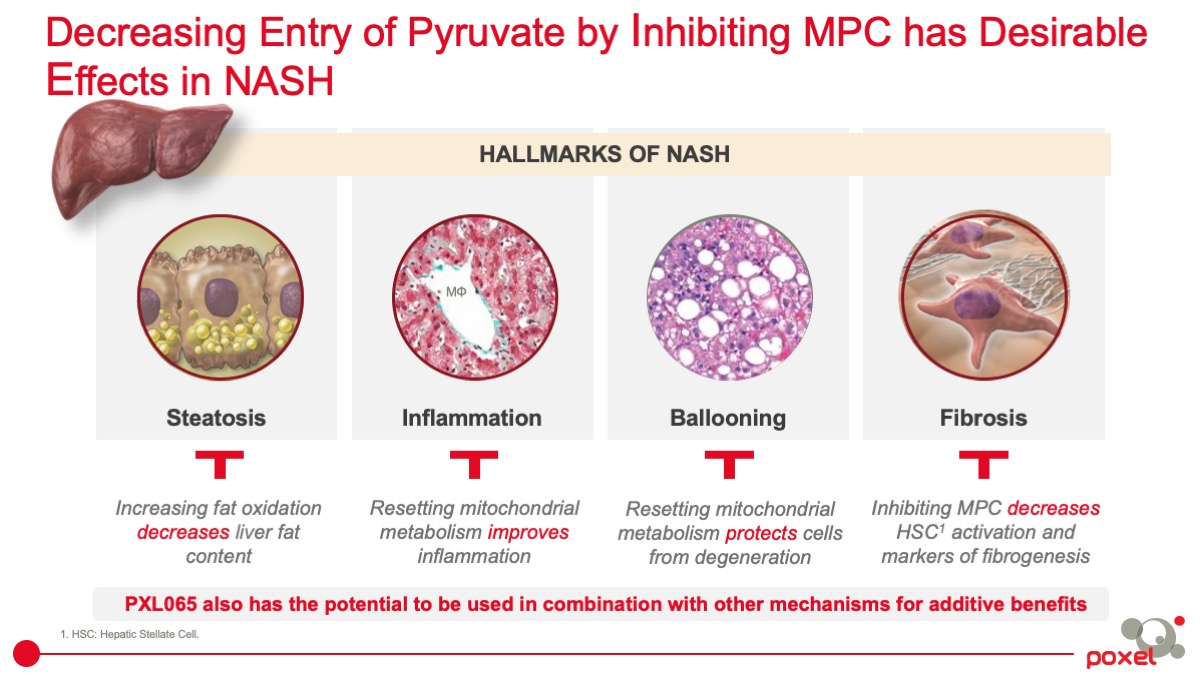 However, its use is restricted due to the adverse effects associated with the activation of PPARy receptors, such as weight gain, bone fractures and fluid retention. PXL065, the R stereoisomer, is a targeted inhibitor of the MPC with little or no observed PPARy activation effects and associated adverse effects that appear to be related to the S stereoisomer of pioglitazone. Preclinical models have shown activity of PXL065 in NASH with little or no weight gain or fluid retention. 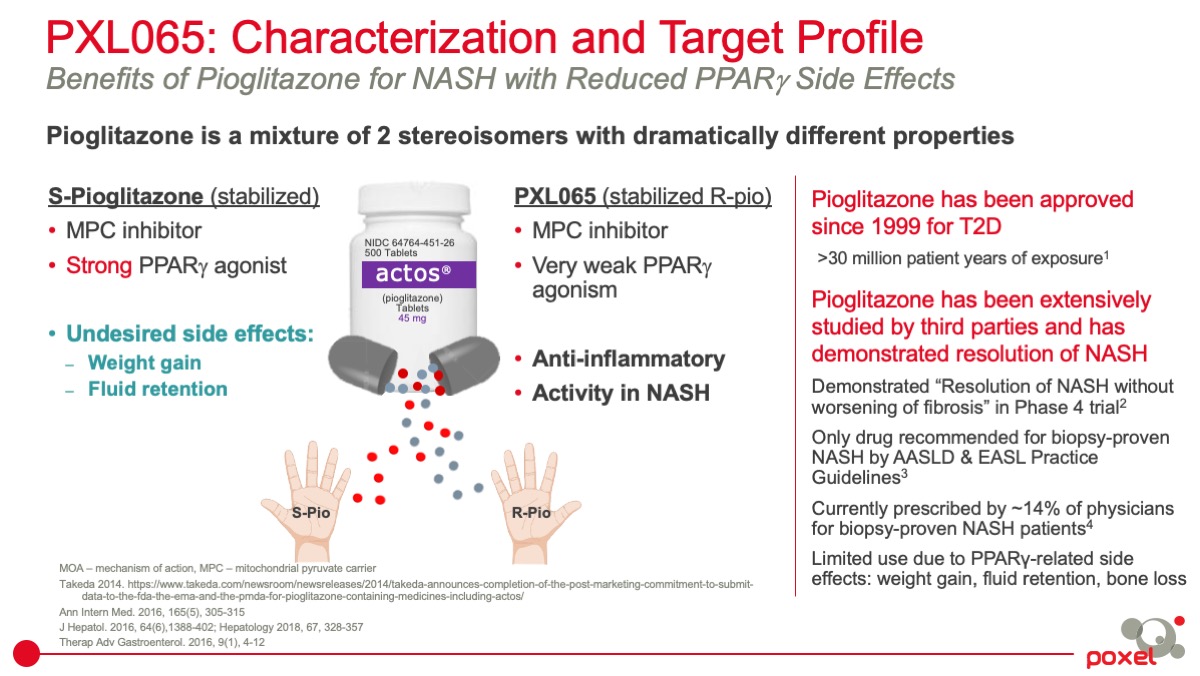 The charts with the data below show the effect of PXL065 on inhibition of the MPC and PPARy agonism. PXL065, d-S-pio and pioglitazone reduced pyruvate-driven mitochondrial maximal respiration, as measured by oxygen consumption rate in HepG2 cells, to the same extent. Pioglitazone and d-S-pio were shown to bind to PPARy and behave as PPARy agonists, while PXL065 showed little binding and no PPARy agonist activity at concentrations up to 100 nM. 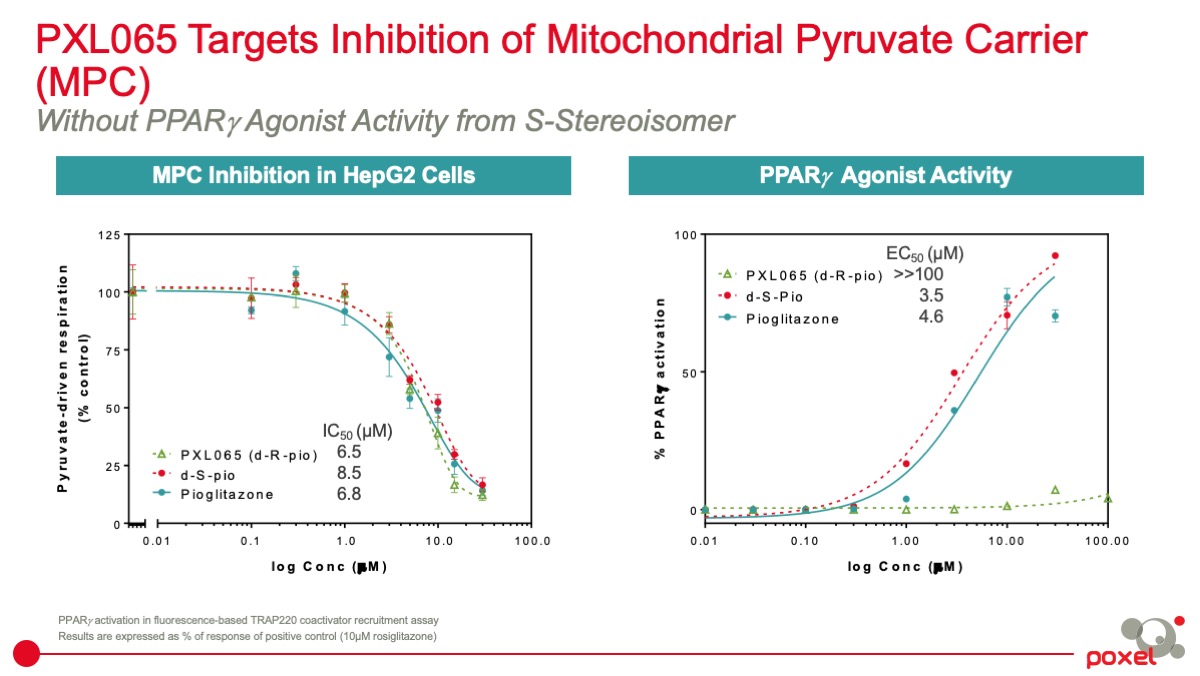 In November 2018, we announced the results of the first part of a Phase 1a open-label trial to evaluate the safety, tolerance and pharmacokinetic (PK) of a single dose of PXL065 compared to pioglitazone in healthy subjects. In this trial, 12 healthy volunteers received a single oral dose of either 45 mg of pioglitazone or 22.5 mg of PXL065. Based on the results of this trial, a PK model was generated to predict the dose of PXL065 that would produce the same exposure to R-pioglitazone as the 45 mg dose of pioglitazone, as well as the number of days of use of the drug required to achieve this equilibrium. In addition, exposure to PPARy agonist metabolites was compared with equivalent doses of PXL065 and pioglitazone.

PK modeling predicted that a 15 mg dose of PXL065 should provide the same exposure to R-pioglitazone as a 45 mg dose of pioglitazone. The PK results and simulations in humans, associated with preclinical animal studies, suggest that PXL065 could potentially have the same efficacy on NASH as pioglitazone, but with fewer PPARy receptor-related adverse effects, such as weight gain and fluid retention. During the Phase 1a trial, PXL065 was well-tolerated and no adverse effects were reported.

In April 2019, we announced results of the second part of the Phase 1a trial, a single ascending dose trial that included three single doses of PXL065 and a single dose of pioglitazone, which tested different doses of PXL065 (7.5 mg, 22.5 mg and 30 mg) and evaluated the safety and PK profile of the product compared to pioglitazone in 24 healthy subjects. In this trial, PXL065 was well-tolerated, with no serious adverse events. PK assessment showed that PXL065 plasma exposure (Cmax and AUC) increased in a dose-proportional manner up to the 22.5 mg dose following oral administration with moderate inter-individual variability. Furthermore, stabilization of R-pioglitazone with deuterium was observed at all doses tested.

As displayed in the charts below, the PK assessment showed that PXL065 plasma exposure increased in a dose-proportional manner up to 30mg, the highest dose tested, when using a tablet formulation. Stabilization of R-pioglitazone (R-pio) with deuterium was observed at all doses tested, which is consistent with the results observed in our Phase 1a single dose trial. 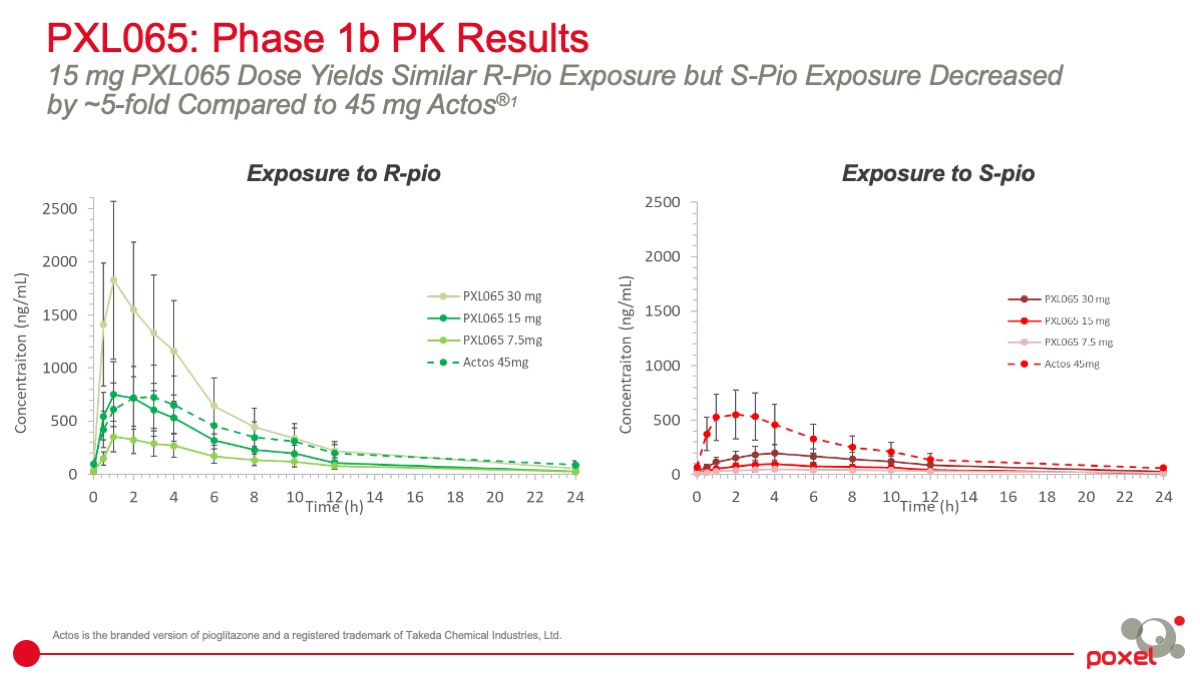 In December 2019, results were announced from the Phase 1b, multiple ascending dose, double-blind, randomized, placebo-controlled trial in 30 healthy subjects to evaluate the safety and the PK profile of PXL065 and support dose selection for a pivotal trial. The Phase 1b trial was observed to show dose proportionality at all doses tested. A summary of the Phase 1a/1b results are shown in the table below. 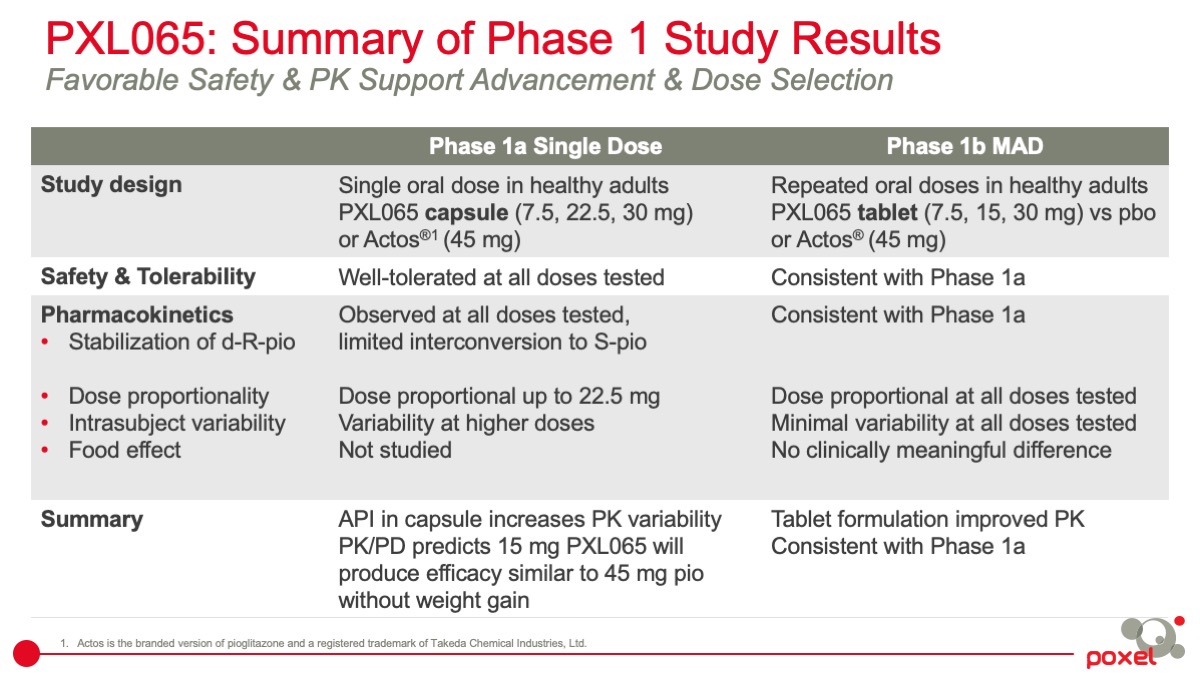 Based on these results and other clinical and preclinical data, we were able to identify the dosing range of 7.5 mg to 22.5 mg, which will be evaluated in a Phase 2 trial. The Phase 2 trial design for PLX065 is shown below. Initiation of this trial began in September 2020. 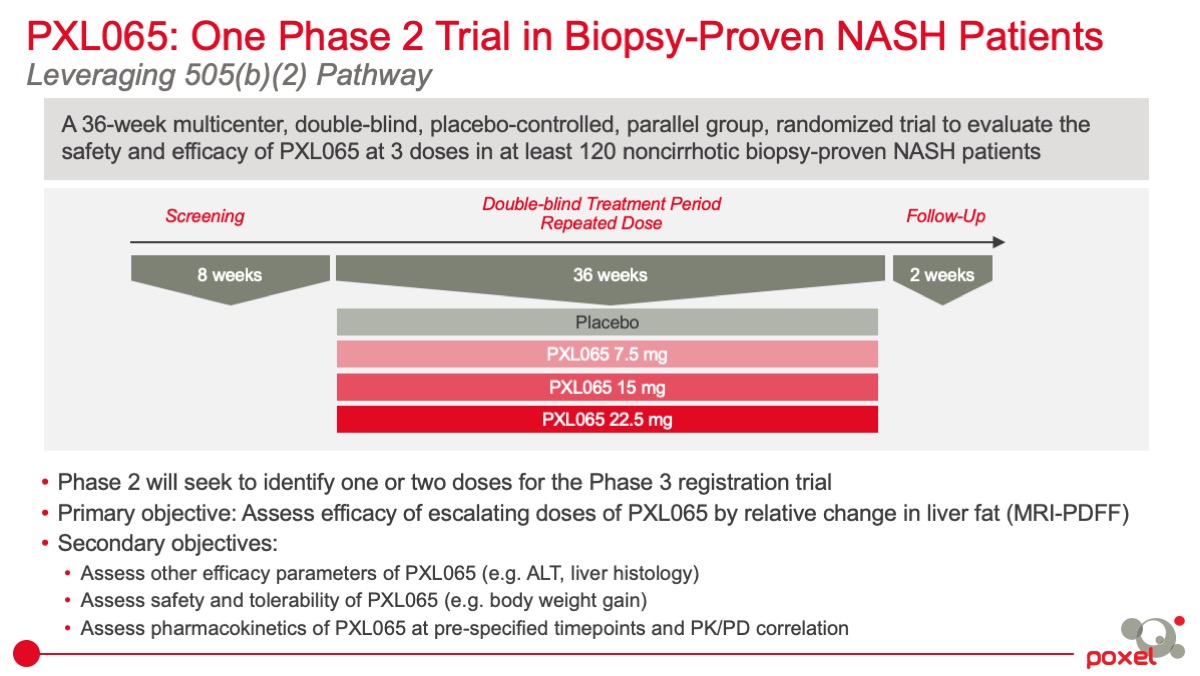 Given the mechanistic heterogeneity of NASH, we believe there is a need for combination approaches that target multiple pathways in the disease’s progression. Our two lead products in NASH target distinct pathways, and we believe that the differentiated profiles of PXL770, which allosterically activates AMPK to mitigate metabolic overload in liver cells, and of PXL065, which inhibits MPC to prevent liver inflammation and fibrosis, are well-suited for use as a combination therapy. To this end, we are currently conducting preclinical studies for PXL770 and PXL065 in combination together and with other therapies using other mechanisms of action that we believe could have additive or synergistic benefits for the treatment of NASH.

Non-alcoholic steatohepatitis (NASH) is a metabolic disease with no clear disease origin that is quickly becoming a worldwide epidemic. It is characterized by the accumulation of fat in the liver causing inflammation and fibrosis. The disease can be silent for a long period of time, but may progress towards severe damage and liver fibrosis, which ultimately can even result in liver failure and/or liver cancer. Typical risk factors for NASH include obesity, elevated levels of blood lipids (such as cholesterol and triglycerides) and diabetes. Currently no curative or specific therapies are available.

NASH is a severe form of NAFLD. These liver diseases aggravate cases of cirrhosis and hepatocellular carcinoma. According to published estimates, about 10% to 30% of NAFLD patients also suffer from NASH.