Our most advanced drug candidate, Imeglimin, is a novel, diabetes treatment that has successfully completed Phase 3 development in Japan and is Phase 3-ready in the US and Europe. We believe it is the only oral compound with a dual mechanism of action that is directly designed both to increase insulin secretion in response to glucose and to reduce insulin resistance. As a consequence of these effects, we believe that Imeglimin has the potential to slow disease progression and provide therapeutic options to patients who no longer respond to current treatments. It may also have the potential to complement existing treatments and to decrease cardiovascular risk factors. The mitochondrion is the power station of the cell and its dysfunction is implicated in the pathophysiology of type 2 diabetes. By targeting the mitochondria, Imeglimin can simultaneously target the pancreas, muscles, and the liver, which are the key organs and tissues involved in type 2 diabetes pathophysiology. To date, Imeglimin has been evaluated in 28 clinical trials and administered to an aggregate of 400 non-diabetic subjects and over 1,800 type 2 diabetes patients in the US, Europe and Japan. Imeglimin has been well-tolerated in these trials and we have observed statistically significant reductions of hemoglobin A1c, or HbA1c, and other glycemic parameters versus placebo.

We have entered into a partnership agreement for Imeglimin with Roivant Sciences GmBH, or Roivant, for commercialization rights for the United States, Europe and all other countries not covered by the Sumitomo Dainippon Pharma agreement.

In the United States and Europe, Roivant, through its metabolic-focused subsidiary Metavant, will initially target type 2 diabetes patients with moderate to severe chronic kidney disease, or CKD stages 3b/4. Approximately 2.4 million adults in the United States have type 2 diabetes and CKD stages 3b/4, according to the Centers for Disease Control and Prevention, and these patients have increased cardiovascular, or CV risk and challenging glucose management requirements.

We believe that there is a need for a new treatment for patients with type 2 diabetes and advanced CKD, one that can provide efficacy and a safety profile with significantly reduced hypoglycemia risk. In July 2019, we reported results from a pharmacokinetics, or PK, and pharmacodynamics, or PD, trial of Imeglimin, which was observed to be well-tolerated in this specific patient population, consistent with the safety profile observed in previous trials to date and supportive of its potential in this patient population. The preparatory work for the Phase 3 program is ongoing and the Phase 3 program is expected to be launched once the FDA discussions will be finalized.

While current treatments are often initially effective in helping patients maintain glucose homeostasis, they present a variety of safety issues. For example, metformin can cause lactic acidosis, a dangerous buildup of acid in the blood, in patients with liver and kidney disorders and is, therefore, not a viable option for such patients, although it rarely results in hypoglycemia. By contrast, oral sulfonylureas can increase the risk of hypoglycemia and weight gain. Oral thiazolidinediones, or TZDs, have been associated with weight gain, fluid retention and bone fractures. Further, many commonly prescribed treatments, including metformin, alpha-glucosidase inhibitors, oral DPP-4 inhibitors and GLP-1 receptor agonists, are also associated with nausea, vomiting, diarrhea, dizziness and weakness.

Moreover, many current treatments are limited in their ability to sufficiently delay disease progression or prevent complications of type 2 diabetes. Even when existing treatments are effective in blood glucose control, they often fail to control further disease progression and do not address associated co-morbidities. For example, according to Decision Resources, approximately 56% of patients become refractory to metformin within three years, representing approximately 20 million patients in the G7 countries. This shortcoming is of particular importance in light of the fact that the mortality ,which occurs in diabetes patients, is primarily linked to cardiovascular disease and is exacerbated with poor metabolic control.

Most antihyperglycemic medications may be used to treat type 2 diabetes in patients with mild CKD; however, CKD stages 3b/4 present challenges as medications are either not advised, are contraindicated, or require dose adjustments in patients with more advanced renal impairment. These limitations include: 1) safety risks with increasing severity of renal impairment; 2) loss of efficacy (glycemic control) with worsening CKD; and 3) the need for dose adjustment with increasing severity of renal impairment. Insulin and insulin secretagogues are the most commonly used therapies, but are often used at suboptimal doses to reduce the risk of hypoglycemia.

As a consequence of these limitations, the segment of type 2 diabetes patients with CKD stages 3b/4 currently face limited therapeutic options for the management of their disease. Imeglimin’s mechanism of action, supported by non-clinical data and clinical findings, offers the potential for effective glycemic control in patients with CKD stages 3b/4. Imeglimin could also be used as an add-on to various antidiabetic agents for additional glycemic efficacy in this population. In addition, Imeglimin has been observed to have a tolerability profile similar to the placebo in subgroups of patients with impaired renal function.

Antihyperglycemic treatment in patients with type 2 diabetes and CKD is complex due to contraindications, dose adjustments, and safety concerns with worsening renal function. The chart below describes certain limitations of existing therapies when used to treat type 2 diabetes patients with CKD. 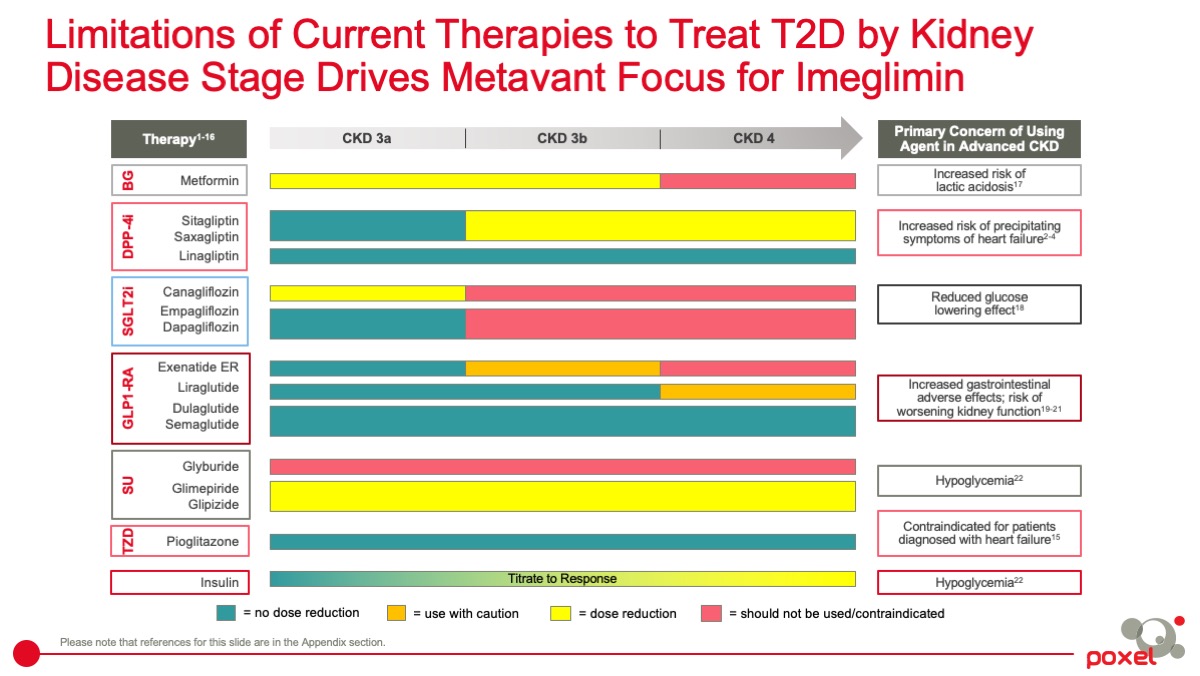